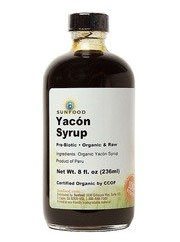 Yacon Syrup Review – Is it Good for Weight Loss?

What is Yacon Syrup?

The developers of weight loss supplements are always looking for new and beneficial ingredients to help make their products even more powerful and effective. These ingredients can include fat burners, metabolism-boosters, appetite suppressants or other ingredients that may have a beneficial impact on various aspects of your physical health. One such beneficial ingredient that you may find frequently employed in weight loss formulas is Yacon Syrup. Derived from a South American Tree, Yacon Syrup is a natural source of all kinds of probiotics that could benefit your health.

While it may not be a fat-burner, or some kind of ingredient that can allegedly boost your metabolism, studies seem to indicate that Yacon Syrup could possibly help lower your blood sugar and cholesterol. Healthy blood sugar and cholesterol are very important, especially if you’re trying to keep your body healthy, but will Yacon Syrup be enough to help you lose weight if it can’t burn fat or boost your metabolism? We decided to take a look into this ingredient so that we could let you know.

Apparently, the beneficial effects Yacon Syrup can have on various aspects of your physical health have actually been clinically proven. Yacon Syrup has been the focus of a double-blind clinical study featuring a placebo-control and 55 women currently struggling with obesity. The study last for four months, over the course of which the women ate a low-calorie diet. 40 women regularly took Yacon Syrup over this period of time. A control group of the 15 other women received a placebo without any active ingredients. After these four months, the women in the Yacon Syrup group showed substantially greater health improvements than the other 15 who’d just been taking the placebo.

Based on the results of this study, Yacon Syrup seems to be capable of reducing your body mass index, lowering your insulin and balancing your cholesterol, as well as improving the consistency and regularity of your bowel movements. It seems like Yacon Syrup really might result in weight loss, because the women who’d been taking the ingredient actually ten centimeters from their waistlines.

These results are definitely good and promising. However, it’s important to remember that you can’t really judge a supplement or ingredient just from one test, especially when it’s from such a small sample.

Yacon Syrup is an excellent source of sugar molecules known as Fructooligosaccarides. Bacteria in your stomach are able to use Fructooligosaccarides in order to create anti-obesity fatty acids. This process is allegedly capable of suppressing your appetite by influencing one of your body’s essential hunger hormones known as Ghrelin.

If you’re trying to find a weight loss supplement made with only natural ingredients, try looking through our top 10 list.

IF you take more than just the daily-recommended dose of Yacon Syrup, you may find yourself experiencing some nasty side effects. These side effects include digestive issues such as flatulence, diarrhea and stomach pains, as well as possibly debilitating nausea.

Due to its sweet, relatively enjoyable taste, Yacon Syrup can be used to sweet warm beverages such as coffee or tea.

Just because Yacon Syrup is commonly included in weight loss products does not necessarily make it a true weight loss ingredient. While the benefits it can have on your body may contribute to healthy weight loss, you probably aren’t going to lose any weight at all if you just take Yacon Syrup by itself.

You can find plenty of better products for the same amount of money.

Yacon Syrup is a South American ingredient commonly found in weight loss supplements. However, it can also be purchased as a standalone product. While not technically a true weight loss ingredient, Yacon Syrup can contribute to healthy weight loss by improving various aspects of your physical health, such as your blood sugar and cholesterol. Clinical studies have tested Yacon Syrup’s abilities and the results seem to be good, but more studies are required before we can prove anything about Yacon Syrup.

Yacon Syrup definitely seems like a beneficial ingredient, but we’re not sure if it’s really an effective weight loss component. If you purchase a supplement containing Yacon Syrup, be sure that it has something else in it to boost your metabolism or burn fat, too.

It’d be a good idea to look for a diet pill that will be more effective and better for you.