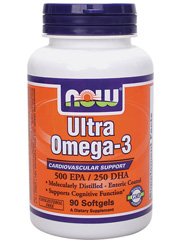 What is Ultra Omega-3?

Though the presentation of this product is very hushed, its intention is to potentially prevent coronary heart disease thru supplementation of healthy omega fatty acids. These easy to digest capsules contain fish oil in concentrate form from various fish sources.

Not only do the omegas found inside promote heart health but they’re also intended to promote healthy brain function. While this can be found in most omega supplements we have to factor in this individual brand. So just how useful is it and where does it rank?

Let’s take a look inside.

Founded in 1968 in the state of Illinois, the company Now Foods offers various supplements and nutritional products at a typically reduced price.

The company always ranks high by the FDA for their GMP certified factories assuring quality and overall safety. They also work internationally with more than 1,400 products currently manufactured.

According to the bottle itself the FDA makes claims that strong evidence(but not confirmed) shows a potential link between EPA and DHA supplementation for heart disease reduction.

The omega 3’s inside are meant to thin the blood which promotes a healthy flow of blood.  This in turn reduces blood pressure while bringing down triglycerides which are known to impact arteries.

As far as the brain, membranes inside are activated such as protein and they support a quicker function.

Stress thru natural aging and even disease is also regressed which helps the telomeres(which effect cells age and function) stay strong and resist them from damage.

So far all these above positives have been seen with natural omega 3’s which can be found in various foods such as walnuts and fish.  This product contains a fair amount of EPA and DHA, however other brands have more and in fact this brand was tested thru independent lab studies. The information lead to knowledge that this product has a mid grade level of contaminants named PCB. Also the product contains soy which some may do better do avoid. Any supplement that exists with EPA and DHA from a good source can provide benefits it’s just this one has a bit more to go to be considered elite.

Inside these capsules are vitamin E that is sourced from soy. Soy tends to be genetically modified as well as known to promote estrogen production. Supplements completely free of soy are available to satisfy your needs without this unnecessary additive.

-Fish Oil Concentrate: This comes from mackerel, anchovies and sardines which are typically cheaper in price to other fish sources.  Due to fish oils nature it can spoil. Fish oil is also rich in omega 3’s while keeping a lower omega 6 ratio.

Bottle clearly states the several common allergens that do not exist. Product can also be purchased thru multiple retailers. It’s molecularly distilled which makes it safer to consume.

Lab testing was done on several fish oil supplements and this brand ranked in the mid tier section as far as harmful PCB’s are concerned. While still in the legal limits there are other brands that rank lower in the potentially cancer causing PCB’s. PCB was a chemical used in the late 70’s which contaminated water sources as well as fish, they were quickly banned after notice came about it’s harmful effects.

The product also has soy which is probably not organic as it does not include a notice of being so. Not only is 93% of all soy genetically modified, but there is the potential possibility for a change in hormones. Phytoestrogens found in soy have shown negative effects in some studies; soy can deregulate estrogen production. For some the shift upwards or downwards can have possible side effects.

According to a lab testing website this product ranks as number 21 out of 51 in terms of quality. This is due to their low score on “product purity” and “ingredient safety”. This mediocre score places it as mid-tier at best.

Now Foods offers a lot of cheap well rounded products and it has a long history of certified GMP safe practices. This product is a decent purchase but it fails to impress and doesn’t rank high in much categories. With included soy, higher than average PCB’s, and the fact it’s sourced from cheap fish which can be purchased in purer forms, it’s easy to see there’s still a lot missing here.

Fish oil comes in many different forms with different strengths and amounts of contaminants found. This product isn’t the worst but it does lack in key areas where other supplements shine while still providing quality and a good price.

Taking the right product is a simple process when you know what to look for. Highly customer rated products that are all natural and beneficial are readily supplied.