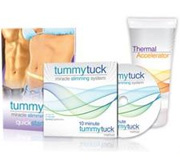 What is Tummy Tuck Belt?

This non surgical approach to stomach reduction claims to reduce  the look of belly fat and in turn give a more fit appearance. They claim that with only 10 minutes a day you can expect results long after you remove the belt.

Interestingly enough they mention exercise and dieting is not necessary, but that it will increase positive results.

There’s several similar types of products on the market, so what does this one offer?

Time to figure out what it can do.

Savvier Inc can be found in California, their site claims them of being a marketing specialist.

In 2004 they were forced to discontinue the claim that their weight loss product could burn off body fat due to no actual evidence provided. The FTC took them to court and Savvier was forced to start a 2.6 million refund campaign to customers of their product.

There are 3 options offered for customers. To those who don’t want to include diet and exercise, they recommend a 30 day plan, 10 minutes each day of wearing this belt with a thermal cream on the stomach. Also one must contract their stomach for 2 minutes while the rest of the 8 minutes can be left doing anything you want.

For those looking for quicker results the same applies but with diet and exercise included.  The reason why this product is said to work is due to the thermal  cream that warms the stomach area 3 hours after working with the belt. Apparently a study was done looking at the heat that protruded from the stomach which is said to reduce the look of a big belly.

While there isn’t anything you actually ingest there is the cream that has substances such as Ethoxydiglycol which according to Environment Canada, is a harmful substance when applied to skin, which is exactly where it is intended to go. Real solutions to weight loss without potentially hazardous additives can be easily found.

Available for men and women. Product also comes with instructional video. Website seems to be secured thru a safe processing system.

Due to the lack of evidence and numerous negative customer experiences it’s hard to see much benefit from this product. Interestingly enough they actually claim to have performed tests on its effectiveness. However there are no published articles available and only a short video.

The product also does not do a good job of explaining how the belly is reduced. If the cream added as a thermogenic effect than why doesn’t it also reduce weight? Currently this product is  said to reduce the appearance of a big stomach but no mention as to overall weight loss is mentioned. It doesn’t make much sense as it appears to get rid of water weight, however the company does not explain exactly how it works.

Another concern are the ingredients in the tummy tuck cream. There are certain potential irritants and it isn’t meant to be added to damaged skin. In fact there is caffeine and theobromine, both stimulants that do not have a accurate dosing for their strength. This can wreak havoc in some with sensitivities and the manufacturers do not disclose any of the ingredients. Customers will receive a unknown dose of stimulants and not even know it until they read the ingredient list.

Several customers have reported issues with the shipping method. Many have noticed their payment was processed yet they never received their product. It’s unclear why so many have been left with less money and with nothing to show for it.

Note worthing is the FTC lawsuit that found this company guilty of making exaggerated claims. Due to the highly questionable promises made of this products effectiveness, it’s important to also look at their history of proven lies.

This product seemed too good to be true, and due to the overwhelming negative customer opinions and the past lawsuit where they were found to lie, it makes it clear. This product has a lot of boasts and claims to be easy and effective. Due to the ingredients in the cream and the lack of evidence it’s hard to take it seriously.

While a non surgical item is ideal, this product still lacks in many areas and most customers tend to agree. That’s why it’s important  to take in supplements that work in the body to provide real change.

Instead of relying on highly questionable items whose own company has been caught lying about fat loss in the past, we recommend alternatives. All natural supplements from reputable business can provide wholesome change for weight loss.