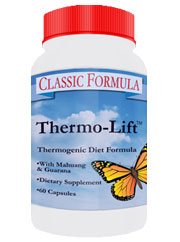 Thermolift Review – Does it Really Work?

One of the most controversial weight loss supplements of all time is known as Ephedra. Ephedra was a prescription strength weight loss ingredient harvested from a Chinese Plant. Today, Ephedra is illegal in the United States. It was banned by the Food and Drug Administration after using it was found to result in some grave and even deadly side effects, including stroke and heart attack. Needless to say, the banning of Ephedra dealt a huge blow to the weight loss market. Supplement producers had truly lost one of their champions.

However, you can actually still find Ephedra in plenty of weight loss supplements still on the market today. How is this possible? It gets a little confusing. Ephedra is harvest from a part of a Chinese plant with weight loss benefits and the risk of dangerous side effects. Today, supplement companies still employ part of that plantin their formulas. However, the Ephedra that is in weight loss supplements today is extracted from a different part of the plant that is completely harmless. So what’s the catch? This part of the plant may be harmless, but it also lacks the elements of the other part that make it such an effective weight loss ingredient.

Simply put, Ephedra is either very effective and dangerous, or safe and totally ineffective. It makes you wonder if any of the supplement companies still selling this ingredient are just pulling a trick on all their customers. One product that claims to still use Ephedra is Thermolift, so let’s take a look at it as an example of a legal Ephedra product.

Thermolift is made by a supplement company that shares its name. They’ve reportedly been in the supplement business for ten years. Along with their namesake, Thermolift also makes several other health supplements, such as detox supplements. We were discouraged by how little information Thermolift’s website offered about the company itself. You should never buy anything from anyone if you don’t know much about them.

Thermolift claims to work because it contains Ephedra, which is a powerful prescription strength weight loss ingredient. Ephedra helped a lot of people lose a lot of weight back in the 1990s, but it was banned by the Food and Drug Administration after it resulted in dangerous side effects like strokes and heart attacks.

If you go looking for reviews written by people who have actually tried Thermolift, you won’t find too many positive ones. Many users seem to agree that the product was more effective in the 1990s. This is because they have probably had to substitute a safer but ineffective strain of Ephedra from the dangerous one they used to use.

Thermolift makes a pretty big deal about the fact that it contains Ephedra, which quite frankly rubs us the same way. We’re not sure how educated Thermolift is on the Ephedra situation themselves. Do they think they’re getting away with selling an illegal powerful ingredient? Or are they chuckling behind their customers backs as they sell them something useless, consoling themselves with the knowledge that at least the ineffective ingredient won’t hurt anyone? Either way, we simply can’t get behind any company that sells supplements containing Ephedra or any related substance.

Thermolift also contains a proprietary blend of various other ingredients designed to promote feelings of good health. Due to the fact that they’re included in a proprietary blend, the doses of each are impossible to determine and they all may be ineffective.

If you’re looking for a supplement with natural ingredients, you’ll be able to find plenty in our top 10 list.

None of the independent reviews of Thermolift mention any side effects, so it’s quite possible that the Ephedra in the product is benign. That’s a relief, but it doesn’t make us feel better about the fact that Thermolift is still being sold with Ephedra.

Thermolift comes with a 30-day money back guarantee.

Thermolift contains Ephedra, a dangerous ingredient banned by the FDA. We can only assume that this extract of Ephedra is ineffective and harmless, considering that it’s made it onto the market. The Ephedra in Thermolift will not help you lose weight.

There are better options on the market for the same amount of cash.

Thermolift is a supplement that can allegedly help you lose weight due to the inclusion of Ephedra in its formula. Banned by the FDA because of its dangerous side effects, Ephedra still exists on the market today in an ineffective but safe form. Companies like the ones who make Thermolift fail to mention this, though, preferring to keep their customers under the impression that they’re buying something with powerful ingredients. We do not approve of marketing tactics like this and we cannot recommend that you buy Thermolift or any of its associated products.

Thermolift seems like nothing but a waste of time and money. Considering the dishonesty of its parent company’s marketing tactics, you may want to stay away from their other products as well.

You can easily find a weight loss supplement that is safer and more effective.