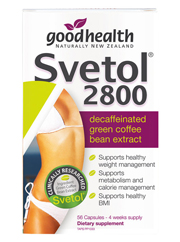 Svetol Reviews: Is It Safe?

Svetol is not really a standalone weight loss supplement; rather, it is an active ingredient found in various weight loss products such as Femme Factor Body Fit, Shape Smart and Meta Slim. Essentially, Svetol is another name for a Green Coffee Bean Extract with a fat burning effect that its makers claim is clinically proven to result in body mass index reduction and glucose regulation.

However, while Svetol is indeed a popular ingredient in a good number of weight loss products, the clinical studies that supposedly support its effects may not be as conclusive as Svetol’s creators would like you to believe. Let’s take a look at the history and science behind Svetol and see if it really is the miracle ingredient that many weight loss products would have you believe.

The Svetol ingredient is produced by Naturex, a nutritional extract research and development company with 16 industrial production sites around the world.

As Svetol is more of an active ingredient than a standalone weight loss supplement, different products containing Svetol are created by different companies. One such product that is marketed simply as Svetol Slimming Green Coffee Bean Extract is produced by Europharma USA, a Wisconsin-based company whose mission is to bring popular European health remedies and practices to the American market.

Another company known as Swanson Health Products also markets a Svetol Green Coffee Bean Extract, so we’ll consider both company’s Svetol products as we get an idea of how this active ingredient typically works and how it’s used.

According to supposedly clinical test studies, chlorogenic acid is capable of burning fat in various ways. For example, chorogenic acid is capable of lipolysis, which breaks down fat stored in your body with a special focus on fat in your liver. The acid can also allegedly prevent fats and carbohydrates from being absorbed into your stomach and intestines, effectively preventing excess calories from being converted into body fat. Chlorogenic acid is even alleged to regulate and normalize your body’s levels of insulin and blood sugar, preventing spikes in both that cause the deposition of body fat.

Reports explaining how well Svetol actually works remain inconclusive. While Naturex’s official Svetol website makes mention of nine scientific studies that have been performed on Svetol and proven its weight loss benefits, it fails to provide any links to these studies, instead listing what might vaguely be interpreted as some of the studies’ outcomes.

In reality, most studies performed on Svetol included only animal and in-vitro testing, while studies involving human subjects have not really been performed yet. The authors of some of the most popular Svetol studies have even admitted that their studies have been severely limited by details such as small sample sizes.

Thus, the effects of Svetol on humans remain unproven and inconclusive. Some even speculate that it is the lingering presence of caffeine in the Green Coffee Bean Extract that is responsible for any weight loss and not the chlorogenic acid as some currently believe.

While Svetol is not known to result in side effects by itself, products containing Svetol as an active ingredient may result in a wide variety of potential side effects due to other ingredients. It is always important to research and properly educate yourself before using any weight loss product.

Given the very small amounts of caffeine in Green Coffee Bean Extract, Svetol is not known to cause any kinds of restlessness or jittery side effects.

Despite the producers of Svetol’s claims, clinical testing of Green Coffee Bean Extract remains very limited and inconclusive, meaning that the ingredient may not actually be as effective a weight loss tool as many currently believe it to be.

Due to the fact that Svetol is merely an active ingredient in various different weight loss tools, you may end up dealing with shady products that may be ineffective and even dangerous.

Svetol seems like the newest miracle cure to answer your weight loss woes, and it seems like many weight loss companies believe the same thing considering how many current weight loss products contain Green Coffee Bean Extract as an active ingredient. However, the effects of Green Coffee Bean Extract on humans remain largely inconclusive due to a very limited amount of clinical testing, despite what the producers of Svetol claim on the ingredient’s official website.

While Svetol initially seems like a miracle ingredient, there is insufficient testing to conclude that it’s actually as effective as many currently believe it to be. There are better options that exist in the form of independent weight loss supplements that have undergone far more rigorous clinical testing than Svetol.