Reviews > Weight loss pills > Suvaril Review – Side Effects. Is it safe for you? Advertising Disclosure 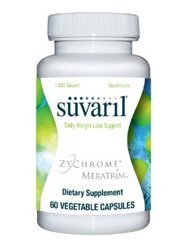 Suvaril Review – Side Effects. Is it safe for you?

The weight loss market is filled with products seeking to harness the power of thermogenic weight loss, the ability to boost your metabolism and raise your body heat to a temperature that’s unfavorable for the formation and storage of fat in your body. Suvaril is just one of the many supplements containing ingredients that are alleged to be able to turn your body into a fat-burning, energy-producing machine.

But if weight loss supplements such as this are so common, why should we choose Suvaril over any of its many competitors? Is there anything about this product in particular that sets it apart from the crowd? Let’s take a closer look at Suvaril and see if it manages to distinguish itself in any way.

Suvaril is produced by Vianda, a natural company supplement that operates out of Cincinnati. Suvaril’s official website redirects back to Vianda’s homepage, where you can find convenient links to contact information such as phone numbers, email addresses and even a physical location.

Suvaril is intended to be taken twice daily. While there is not much in the form of an official explanation describing how Suvaril is meant to work in your diet, its ingredients imply that the supplement is designed to boost your metabolism and body temperature to burn fat and produce energy more efficiently.

Unfortunately, there don’t seem to be any independent reviews of Suvaril available online, so we don’t know what kinds of results actual users of the product have seen. One would imagine that somebody would want to talk about a weight loss product that’s actually able to deliver results, though.

Unfortunately, Suvaril’s ingredients are contained in a proprietary blend, which means that there is no way for us to know how much of each ingredient the product actually contains. Thus, it’s entirely possible that Suvaril does not contain enough of any of its fat-burning ingredients to actually be effective.

The ingredients that can be found in Suvaril’s proprietary blend are as follows:

Chromium: an element that is alleged to improve the functions by which your body’s insulin metabolizes glucoses.

Mangosteen: another ingredient allegedly capable of fighting fat cell growth and aiding in the fat-burning process.

Green Tea: one of the most common weight loss ingredients, green tea is widely believe to have beneficial effects on both your appetite and your metabolism, resulting in you eating less and producing more energy.

While Suvaril’s official information does not advertise any side effects, one of the product’s ingredients is actually potentially dangerous. Weight loss products containing Bitter Orange have previously been linked to side effects as grave as heart attack, stroke and even death. While we can’t be certain whether the inclusion of Bitter Orange was really the reason for occurrence of these side effects in the past, it’s certainly a possibility. The Food and Drug Administration has even issued a warning advising users of supplements to exercise caution when using products that contain Bitter Orange.

Vianda offers free US shipping for all orders over $50.

Due to the fact that its ingredients are contained in a proprietary blend, it’s impossible to know whether or not Suvaril is potent enough to deliver the kind of weight loss results that it promises.

Suvaril contains Bitter Orange, a controversial ingredient that is potentially dangerous and the FDA has warned against using.

Suvaril is a thermogenic weight loss aid designed to boost your metabolism and raise your body temperature to improve the functions that burn fat in your body. While the creators of Suvaril seem to be fairly trustworthy, it’s upsetting to learn that the supplement itself contains Bitter Orange, a controversial ingredient that has previously been linked to such grave side effects as strokes, heart attacks and even death.

At first glance, Suvaril seems harmless enough; it may even actually help you lose a few extra pounds if you incorporate it into your diet and exercise routine. However, the presence of an ingredient as controversial as Bitter Orange should make you stop and reconsider whether you want to use a product that may have serious health repercussions. There are plenty of products on the weight loss market that don’t have the potential to kill you; you may want to take a look at those before you try one that does.