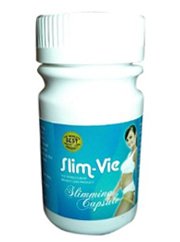 Sometimes it’s hard to determine what kind of weight loss product you should be looking for, at least when you consider the fact that there’s just so many of them. Different weight loss supplements do different things as well; some burn fat, while other weight loss supplements suppress your appetite and boost your metabolism. If you don’t know how to choose, it may just be a good idea to try a product that promises to do all three at once. Weight loss supplements this versatile are not exactly common, but you can find at least one supplement that claims to do it all, in the form of Slim-Vie.

Slim-Vie is a Chinese weight loss supplement that claims to be able to address every aspect of weight loss at once. That’s definitely something to boast about, but is it true? We decided to investigate Slim-Vie so that we could provide you with the answer.

We were very disappointed by the lack of information available about Slim-Vie online. In fact, we couldn’t find any information that indicated who produces or sells Slim-Vie. The only thing related to this product’s history that we were able to learn was that it originates from China. However, this may be all the indication we need to stay away from the product. China’s weight loss market isn’t exactly the most well regulated market in the world; supplements containing dangerous ingredients that are even banned in other parts of the world.

It’s no surprise then, that the Food and Drug Administration recently discovered that Slim-Vie’s formula contained an undeclared ingredient. This ingredient was discovered to be Sibutramine, a dangerous ingredient that was banned from the market in 2023 – four whole years before it was discovered n in Slim-Vie’s formula. Considering that Sibutramine is capable of resulting in deadly cardiovascular damage, you’d be best advised to stay away from Slim-Vie at all costs.

Slim-Vie’s formula is comprised of multiple natural ingredients designed to help you burn fat. Slim-Vie works by simultaneously boosting your metabolism and suppressing your appetite. With so many benefits to your health, Slim-Vie sounds like a foolproof way to lose weight.

Unfortunately, that’s not correct. While some users actually do seem to have lost weight, the majority of the independently written reviews that exist online seem much more concerned with the long list of unpleasant side effects they’ve suffered in place of any substantial or significant weight loss.

Bitter Orange Extract: this ingredient is commonly included in weight loss formulas as a substitute for Epehedra. Ephedra was a prescription-strength weight loss ingredient that was banned by the FDA after products that featured it resulted in deadly liver damage. Some consider Bitter Orange Extract to be a safer alternative to Ephedra, but it may actually be just as dangerous as Ephedra.

Job’s Tears Seeds: this ingredient has been found to result in weight loss when tested on mice. However, there’s never been any testing done on humans.

Mulberry Leaf Extract: this ingredient is frequently used as a treatment for diabetes and can apparently time releases of energy throughout your body, breaking down the sugar you use to make energy at a more gradual pace.

Amylum: this is a starch. While it’s not bad for you, it isn’t related to weight loss either.

Although its list of ingredients won’t tell you, Slim-Vie also contains Sibutramine, which has been outlawed by the FDA due to its deadly side effects. You should never trust a product that contains hidden ingredients; this is the biggest red flag on the weight loss market.

Trying to find a weight loss supplement with a formula made entirely of natural ingredients? Try consulting our top 10 list.

Using Slim-Vie actually runs the risk of some pretty dangerous side effects. For instance, Bitter Orange Extract is alleged to be safer than Ephedra, but products containing it have been known to result in the same fatal liver damage that got Ephedra banned from the market in the first place. Slim-Vie also secretly contains Sibutramine which is an ingredient that has also been known to result in fatal side effects, this time related to your cardiovascular system.

There is nothing good about this dangerous supplement save for how difficult it seems like it would be to obtain. This is one supplement you really shouldn’t even be trying.

Several dangerous ingredients can be found in Slim-Vie’s formula, one of which is not even advertised as being present in the supplement’s formula.

The same amount of money can buy you a supplement that is even better.

Slim-Vie is a Chinese weight loss supplement. Allegedly it can help you lose weight thanks to its metabolism-boosting and appetite-suppressing capabilities. However, Slim-Vie has some dangerous ingredients. Bitter Orange Extract is used as a substitute for the illegal Ephedra, although it may result in the same deadly side effects. We were also appalled to learn that the creators of Slim-Vie have secretly snuck the dangerous and illegal Sibutramine into this supplement’s formula, making it twice as danger with no warning to potential users.

You shouldn’t really trust a supplement if you don’t know who makes it, and you definitely shouldn’t trust a product with secret ingredients. Stay away from Slim-Vie for the good of your own health.

We recommend looking into effective weight loss supplements that are safe to use and good for you.