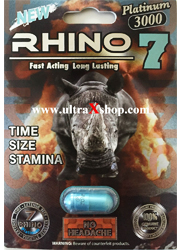 Rhino 7 is a brand of male enhancement pills that are designed to provide immediate, one-time erectile benefits. Their promotional materials claim that they are able to start working within half an hour, and that their effects may last for multiple days.

Their packaging says that it can help men achieve harder, more durable erections, as well as cutting down on the refractory period between sessions of intercourse. They say that it achieves its effects by increasing their users’ circulatory rates, which is one of the key factors in being able to achieve healthy erections.

The supplement that our panel of experts believes can provide the most beneficial effects overall is named Viritenz. It’s an all-natural supplement that is thought to have multiple different forms of circulatory enhancers, testosterone boosters, and libido support. Follow this link to read more about the ingredients that are used in Viritenz’s top-rated blend.

Rhino 7 Ingredients and Side Effects

Rhino 7 does not have an official webpage that displays their contents, however many past users have posted images of the labeling found on their products. The majority of their ingredients are most commonly used in a therapeutic sense by practitioners of Traditional Chinese Medicine and include:

Goji Extract: Derivatives of a particular Chinese berry, which has recently become more popular globally. Goji has some antioxidant properties and may be generally beneficial for blood pressure, however it has very few potential benefits for sexual performance, especially in the short term.

Deng Sen Extract: This is not an ingredient that is recognized by any major medical, herbal, or nutritional information group, including those dedicated to Traditional Chinese Medicine (TCM). There is, however, a report that can be found online about how Deng Sen is a commonly used fake ingredient name used by less scrupulous manufacturers.

Atractylodes: A flower related to the sunflower that is used in TCM to “clean the blood.” It has not been clinically proven to have any medicinal or therapeutic effects.

Cinnamon Bark: Extracts taken from the common spice that may have some aphrodisiac effects, as well as benefits for fighting oxidation and controlling blood sugar levels.

Cornus: A tree known more commonly as dogwood that has been shown to potentially have some uses for fighting the symptoms of malaria but that has not been shown to benefit sexual performance in any capacity.

Cordyceps Sinensis: A type of fungus that can only be found growing out of the corpses of a specific type of Chinese caterpillar. While it is rumored to be an aphrodisiac, there is no hard evidence that this is actually the case.

To see which brands of male enhancement products were named to our team’s top ten list, just click on this link.

The only ingredient listed above that our team actually believes might be able to help men’s sexual performance is cinnamon. Other than that, all of these ingredients are poorly studied, or else the studies that have been conducted have not yielded any significantly positive results.

The vast majority of their supporting data comes from Traditional Chinese Medicine, which, while ancient, has not been able to back up most of its health claims scientifically. Beliefs like the human body being a miniature version of the larger universe, that the body’s wellness is ruled by the competing balance of yin and yang, and that qi is a form of vital energy that runs through all humans, have been largely discredited by laboratory experimentation.

Overall, it seems highly unlikely that these ingredients will be able to have much of an impact on users’ erectile function, libido, or other secondary sexual benefits. Its applications for boosting circulation seem limited, and they do not use any known testosterone boosters in their blend.

Click on the following link to find out how to make the most of your natural size potential.

The Price and Quality of Rhino 7

Rhino 7 does not have their own official website, but instead use a variety of third party retailers found across multiple different online platforms. Due to the high number of different retailers, there is a wide range of prices that Rhino 7 is available for, including the following prices that are listed on Amazon:

This is far more expensive than even other single use supplements, which in turn tend to be more expensive than most daily male enhancement products. Users should also be aware that these sellers are not all known to be reputable, and they should take care to only purchase from companies that have positive reputations online.

For more data about the best male enhancement products for improving your sexual responsiveness and libido levels, just follow this link.

The name of the manufacturer of Rhino 7 and the other Rhino products is not well publicized. The Rhino products are somewhat notorious for not being transparent about their business practices and contact information.

The packaging for Rhino 7 lists their distributor as Express Pac Trading, however there is no information online about any companies with this name. Regardless of this lack of online presence for Express Pac, they are most likely not the manufacturer of Rhino 7 but just an importer or shipping company. This is also not the same distributor that is listed on other versions of the Rhino pills.

Rhino also has a negative reputation within the industry based on their involvement in a number of legal issues, including multiple citations from the Food and Drug Administration regarding their use of unlisted and illegal ingredients in their products. Most frequently, the issue is that Rhino 7 has chosen to include a generic prescription erectile dysfunction drug in their products without listing it on the label.

The problems with this practice go beyond the fact that it is illegal and unethical, it is also potentially dangerous for their users. ED medications require doctor’s approval for a reason: they can be hazardous to users’ health and even deadly if taken incorrectly, by the wrong people, or in conjunction with other medications.

Men that have not been approved for the use of such drugs may be putting themselves in danger by consuming products that contain sildenafil, sulfoaildenafil, or any other PDE5 inhibitors without even realizing it. For these reasons, our team does not tend to recommend the products of any manufacturer that does this, especially if they have established a pattern of such behavior, as the Rhino brand has.

Click here to see how the top brands of male enhancement products compare when measured head to head.

Reviews of Rhino 7 are far more negative than most other supplements that our team has reviewed, including some Amazon pages where they have only received one-star ratings – the lowest possible score on Amazon. Here are some of the specific comments that have been left regarding past users’ experiences with the pills:

“Made me sick. Didn’t give me an erection at all, but maybe that’s just because I was in the bathroom all night.”

“I was not impressed. I guess I was slightly better than normal, but still nowhere near functional. I guess this is what I get for buying stuff off shady websites.”

“I took Rhino right before my crush got over to my place. We had a couple glasses of wine and started watching a movie, but right when we began to get frisky I started getting light headed and sweaty, even though I was shivering. It was scary, and needless to say: no funny business happened with me and the girl.”

The two main issues that men report tend to be either adverse reactions, such as the ones mentioned above, or simple product ineffectiveness. Overall, our team was not encouraged by either the average score or the specific individual comments that they found for Rhino 7.

For more reviews from our panel of male enhancement experts, just follow this link.

Rhino 7 does not meet many of our team’s minimum standards for an acceptable male enhancement product. In general, they tend to recommend daily dietary supplements as opposed to single use pills, and they especially only recommend ones that have ingredients blends that use well-known, scientifically supported additives.

Our team is also very concerned by the business practices of the manufacturers of the Rhino line of pills, as many of them have been found to contain illegal prescription medications that can be dangerous to some men. In general, Rhino 7 does not engage in the behaviors that our team expects from the brands that they will recommend to our readers.

The product that has the best combined manufacturing history, ingredients list, and customer feedback is Viritenz. It is a daily male enhancement nutritional supplement whose ingredients all have their own extensive history of clinical study that proves their effectiveness.

It uses a drug-free blend of natural additives that is manufactured by a CGMP facility that is in compliance with all FDA requirements and never includes any ingredients that do not appear on the label. Click on this link to read more about how Viritenz is made and the types of benefits that it can have for its users.