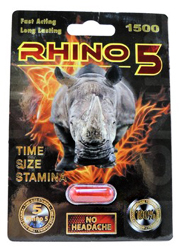 Rhino 5 Review: Is It Safe?

Rhino 5 is the latest in the long line of Rhino male enhancement products. Rhino has built their brand on producing single-use pills that provide short-term erectile support, and Rhino 5 continues that tradition.

Their packaging promises that Rhino 5 can help users increase the length of their intercourse sessions based on both physical and sexual stamina, and that it can actually increase the size of users’ penises. They say that it begins working within an hour and that its effects can last for up to seven days.

The male enhancement product that has shown the best results in its users is Viritenz.

It has helped to improve testosterone function for both younger men that are looking for a boost and older men that are trying to deal with the effects of andropause. Click here to find out if Viritenz’s formula will be effective for your needs.

Rhino 5 is one of the many Rhino-brand male enhancement products that also includes Black Rhino, Raging Rhino, RhinoMax, and Rhino69. They are manufactured in China and distributed in the United States by P & D international, Inc.

The Rhino brand was somewhat notorious for making low-quality pills that frequently caused side effects. Early in 2023, however, their reputation was further damaged when they were busted by the FDA for selling supplements that contained illegal and unlisted ingredients.

Rhino 5 was one of the products that was found to contain sildenafil, a heavily regulated circulatory aid that is illegal to sell without a doctor’s prescription. Sildenafil is regulated mostly due to concerns about the dramatic effects that it can have on users’ blood pressure levels.

People have had serious heart episodes and experienced other side effects from taking sildenafil, and those dangers are magnified even larger when people do not know that they are taking it. Because of this, Rhino 5 and other Rhino products were pulled from the shelves of their US retailers, many of which still refuse to stock their brand.

Rhino has an “F” rating and a 100% negative customer feedback rating with the Better Business Bureau. They also have received an “F” from Fakespot, and were rated at 0/5 stars on Trustwerty, an independent website that analyzes the trustworthiness of online retailers.

Rhino 5 and other Rhino products tend to be fairly expensive, even in the already-costly world of single-use sexual supplements. Depending on where it is purchased from, one Rhino 5 pill can cost between $7 and $10. Other single-use products tend to retail in the $2-$4 per pill range, and daily nutritional supplements can often be taken for as little as $1 per day.

Follow this link to find out how you can improve your sexual satisfaction levels, and those of your partner, through herbal male enhancement.

Rhino 5 is designed to be taken approximately one hour before sexual intercourse. It’s advertising says that it works by increasing the blood flow to the penis, as well as by increasing testosterone levels throughout the body.

The claims of circulatory increase are more believable than the claims of testosterone improvement. It is highly unlikely that users will feel the effects of increased testosterone in the one hour window that Rhino 5 promises.

Testosterone and its effects are all part of the androgen cycle, which is a complicated series of hormones and their chemical causes and effects. It is far more effective to take daily testosterone supplements that help regulate and improve testosterone function than to just intermittently overload on certain chemicals.

Circulatory effects can happen in a much smaller window of time, and users can often see improved blood flow to the genitals within 30 minutes. This makes it much easier to fill the spongy tissues of the penis with the fluids that are needed in order to attain a functional erection.

To see how to increase your seminal output in terms of both quality and quantity, just follow this link.

Rhino 5 does not publish their ingredients list anywhere in their promotional materials, however their previous customers have posted images of their nutrition panel online. Even then, Rhino 5 lists their ingredients in such a way that dosage amounts and other more specific information is impossible to find.

Go Ji Extracts: Chemicals taken from the fruit of the go ji (or “goji” as it is more commonly written in the US) plant. Goji berries are highly nutritious and vitamin rich, however they are not thought to have any direct sexual benefits.

Goji berries are good for blood pressure and circulation in a general sense, however they are unlikely to provide any direct “boosting” effects. There is very little data about the actual biological and chemical effects of goji berries at this time, however none of the studies that have been performed at this time have suggested that goji berries could be useful for erectile health, libido, or any other significant metric of a male enhancement product

Atractylodes: A plant in the sunflower family that has been used in the past in ancient Chinese herbology to help spleen, liver, and stomach function. There is no scientific data that confirms these benefits, and there is not even anecdotal evidence that connects atractylodes to any form of sexual benefits.

Cordyceps Sinensis: A form of fungus that grows exclusively out of the heads of a specific breed of Chinese caterpillar. It is incredibly expensive and is frequently in demand as a medicinal herb in China, despite the fact that there seems to be no scientific or nutritional value to the fungus.

Rubus: A somewhat ambiguous entry, as this refers to an entire genus of plants. The rubus genus contains blackberries, raspberries, and other flowering berry plants. While generally safe and healthy for human consumption, there is no data that has suggested that any of the plants in this family may have sexual benefits.

Panax Ginseng: The only ingredient in Rhino 5’s proprietary blend that has actually been shown to have some sexual benefits Panax ginseng, also known as Korean, Chinese, or “true” ginseng, is one of the most consumed herbs on the planet.

Ginseng is popular in male enhancement products because it is a mild stimulant that is able to increase circulation due to increased heart rate. It has also been shown to be a mental stimulant that can increase the frequency and intensity of sexual thoughts.

To see more data about which male enhancement products’ users have seen the most improvement, just click on this link.

There is very little about Rhino 5 that can actually be recommended, however they do at least use one ingredient that our team includes on their “recommended” list. Panax ginseng is an overall beneficial herb that has also shown some benefits for male enhancement. It is highly recommended by our team of experts.

Rhino 5 has an ingredients list that features additives that have a much stronger anecdotal history than a clinical one. Data has shown that most of the additives that they use are totally useless for male enhancement purposes.

Additionally, their products have been found to contain unlisted ingredients that are not just illegal but are also dangerous for many people. This is not just a legal violation, it is an ethical one as well that severely compromises users’ abilities to trust their products and their advertising claims.

Follow this link for more reviews of the top male enhancement products from our team of experts.

Rhino 5 is a single use male enhancement pill that is designed to be taken directly before sexual activity in order to receive erectile support. Its ingredients, however, make it seem as though it is unlikely that this will be possible for most users.

Early in 2023 Rhino 5 was been found by the FDA to contain a dangerous and illegal additive that resulted in their company being heavily fined and their products being pulled from the shelf, and they are no longer considered a reputable manufacturer. Rhino 5 is far more expensive than most other pills of this nature, despite the fact that it offers no reasonable explanation for why this should be.

The single male enhancement product that they recommend the highest is Viritenz. It has shown the most overall usefulness for improving erections, libido levels, and increasing users’ sexual stamina.

Viritenz has been shown to help its users avoid premature ejaculation, produce a higher volume of semen, and overall have more satisfying sexual experiences. Click here to find out more about how Viritenz affects the male sexual responsiveness.