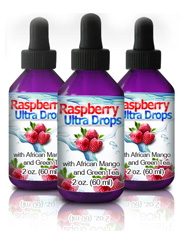 What are Raspberry Ultra Drops?

There has been a lot of hype of raspberry ketones and they’re effectiveness in regards to weight loss. It’s believed that this ingredient can help people burn fat at an accelerated rate. And with Raspberry Ultra Drops, it claims that along with other ingredients, it can do this not in a diet pill, but a liquid drop!

Made popular by Dr. Oz, the key ingredient in this product is sure to have people clamoring over it. Yet at the same time there have been some complaints of this product, from people who call it a scam. So is it really as effective as it’s claimed? Is it a scam? We decided to find out.

Nowhere on the official website is there any listing to who the manufacturer of this product is. This is a big red flag, because why wouldn’t the maker of a so-called effective product not want to make itself known? Raspberry Ultra Drops can only be purchased on it’s own official website.

Raspberry Ultra Drops claim to work through their main ingredient, raspberry ketones. The official website however, is unclear as to how the other ingredients included help with weight loss, other than saying that they are included. Raspberry ketones are claimed to help burn fat at a faster than normal rate. The company’s website does not list any directions as to how to take this product, even featuring some users who are unsure as well and asking questions.

Despite it’s claims, raspberry ketones have been found ineffective in helping people lose weight. There were studies that were done on animal test subjects who were injected with the ingredient, but the same did not transfer over to people who took this orally. There have also been reviews of people who saw no results from use of this product.

The official website is a bit unclear as to the exact ingredients of this product. It does mention three that you can find off the label, namely raspberry ketone, african mango and green tea. If there are anymore ingredients, the website does not mention them. All of these ingredients are all natural, much like ingredients found in diet pills on the top 10 list.

Believed to help burn fat at a faster than normal rate. There were studies done on animals that can verify this, but they were injected with the ingredient. When taken orally by humans, the results were not mirrored.

Also known as Irvingia gabonensis, this ingredient is claimed to help burn fat. Studies that support this claim however, were made by companies that want to sell products, and not independent scientists.

A popular ingredient in dietary supplements, this is known to boost the metabolism, as well as improve mental cognition. Is also known to be full of antioxidants.

This product contains green tea, which is proven to be effective in weight loss, as well as supplying the body with antioxidants called flavenoids.

There have been many complaints from people, reporting that this product is a scam. Some people have ordered the product and not received anything, yet still get billed. There have also been complaints of people getting their emails hacked from clicking on links of this product. There’s also an auto-shipment program that you get enrolled into if you don’t cancel out of the free trial period.

That’s not to mention that the official website makes no mention of who the manufacturer is. They give you no idea who you are buying this product from!

The website also offers no information as to the other ingredients in the product, or the amounts that they come in. It offers a lot of information on other products and why raspberry ketones are good for you, but it all comes off as distracting filler at the end of the day.

There’s one word that describes this product: scam. You would do well to stay away from this product. Stay far, far away.

Just because an “accredited” source from television might say something about a product, that doesn’t necessarily make it so. The ingredients included in this product have been proven to be ineffective. In addition to this, if you are not careful (which it is very easy not to be) you will be signed up for an auto-shipment program that you may not even want to be in! Legitimate dietary supplements don’t resort to tactics such as this. Names of ingredients and images of products are all used to be sold to people. Don’t believe everything you see. Stay away from this product.