Reviews > Weight loss pills > Phenobestin – Side Effects. Is it safe for you? Advertising Disclosure 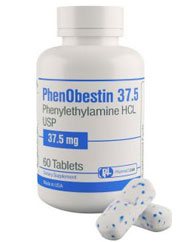 Phenobestin – Side Effects. Is it safe for you?

Phenobestin markets itself as a generic form of the prescription weight loss drugs Phentermine and Adipex, which have previously been banned in Europe due to possibly dangerous side effects. However, products similar to Phentermine remain very popular in the United States, due to the weight loss powers that the drug has reportedly been known to possess.

Phenobestin claims to be able to reduce your appetite and boost your energy, to help you eat less and burn off fat – pretty standard claims for a weight loss product. But can Phenobestin really deliver on its promises? While Phenobestin’s resemblance to powerful prescription weight loss medication may seem tempting, you shouldn’t forget that the drug that it’s based on has been banned in multiple countries due to its possibly dangerous side effects. Let’s take a look at Phenobestin and see if it’s as effective or as dangerous as the prescription drug it claims to replicate.

According to Phenobestin’s official website, the product is produced by a Delaware-based company known as Potent Supplements, LLC. There is not much information about the company online, but they seem to be accredited by the Better Business Bureau, and have been since 2023. The official Phenobestin website offers several forms of contact, such as a phone number, email form and physical address, but is very poorly designed and reads as if written by someone with a poor understanding of the English language.

The official Phenobestin website instructs users to take one or two capsules of Phenobestin with breakfast, and another with lunch. The site also warns users not to exceed four capsules in one day, but does not explain why.

Phenobestin claims to be able to effect your body on a chemical level to reduce your appetite, boost your mood, and provide you with extra energy. It allegedly accomplishes this due to its unique formula, which contains Phenylethylamine HCL to boost boost dopamine levels in your body and produce a feeling of well-being, as well as Synephrine HCL to boost your metabolism and N-Methyl-B-Phenylethylamine HCL to suppress your appetite.

Phenobestin makes no claims to be clinically proven, and many of its ingredients have been untested on humans. Some positive reviews of Phenobestin can be found on the product’s official website, but company-provided testimonials are usually biased or just fake altogether. Phenobestin has received some positive reviews in other weight loss circles as well, but many claim to have had disappointing experiences with the product as well, detailing either a lack of weight loss or unpleasant side effects.

Phenobestin’s official site claims that Phenobestin’s formula does not contain any herbal extracts because “herbs don’t work for weight loss!!!” However, some of Phenobestin’s ingredients are still naturally derived.

The official Phenobestin website claims that no side effects of the product have ever been reported, but plenty of outside reviews have detailed quite a few. The amount of stimulants in Phenobestin is likely to result in jitteriness, anxiety and insomnia. Other ingredients, such as Synephrone HCL, raise heart rate and blood pressure, as does Yohimbe Extract, use of which can lead to a wide variety of side effects, from vomiting and nausea to dangerously high levels of heart rate and blood pressure. Long term side effects of Phenobestin remain unknown, but potential users should be aware that the drug it is based on, Phentermine, was initially banned after long-term use was proven to result in permanent heart valve damage.

Phenobestin comes with a 100% money-back guarantee.

Phenobestin is not clinically proven to work and contains many ingredients that have either not been approved by the FDA or may potentially result in dangerous side effects. Phentermine, the drug Phenobestin is based on, was banned due to the discovery that long-term use resulted in permanent heart valve damage. Long term side effects of Phenobestin are unknown, but it’s possible that it may have the same damaging effect on your body.

Phenobestin is a generic form of the prescription weight loss drug Phentermine, which has been banned in multiple countries after long term use was proven to result in permanent heart valve damage. Phenobestin claims to be a safe product that offers all of the efficient weight loss properties of Phentermine, such as the ability to suppress your appetite and boost your metabolism, but some of its ingredients are not approved by the FDA and may result in dangerous side effects.

The fact that Phenobestin closely resembles a powerful prescription weight loss product is certainly alluring, but there’s a reason why Phentermine was originally banned, and this knock off may be just as dangerous. It’s not clinically proven to work, so why risk experiencing nasty and potentially dangerous side effects for something that you’re not sure about? There are safer products on the market, and ones that are probably more effective, too.