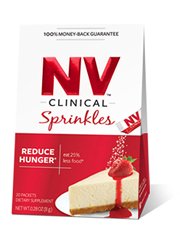 In our age of instant gratification, people who go on diets or start exercising aren’t just looking to lose weight… they’re looking to do it fast. If you’re trying to drop your excess weight as quickly as possibly, you may want to look into trying NV Clinical, a health supplement that offers the quickest start to weight loss on the entire market. With a special blend of super fruits and even several ingredients that may help fight the physical signs of aging, NV Clinical seems pretty sure of itself and its claims.

But being the fastest on the market would be no easy feat. And let’s not get ahead of ourselves, before we start worrying about how fast it is, let’s find out if NV Clinical really even works. We investigated this supplement. Here’s what we were able to find out.

NV Clinical was reportedly created by a 15-year-old Canadian supplement company by the name of Wellnx Life Sciences. While Wellnx has their own official website, it makes no mention of NV Clinical. Wellnx does not seem to be selling the product, either. As a result, official information about NV Clinical is pretty hard to come by, which is frustrating when you try to learn as much about health supplements as we do. We definitely don’t trust companies this disorganized though; we treat that as a red flag tell us to avoid a company and their products.

Unfortunately, we couldn’t find any official explanation detailing how NV Clinical actually helps you lose weight. Judging from its ingredients however, we see several that are commonly used to boost the human metabolism. By boosting your metabolism, you improve the way your body makes energy out of the calories from the food you eat. A well-boosted metabolism will turn all of the calories you consume into energy, leaving none to be stored as fat in the rest of your body.

It’s not hard to find reviews written by people who have actually tried NV Clinical, but they aren’t too helpful. While some people actually report losing weight, others haven not seemed to lose any weight at all. One former customers claims that NV Clinical is not as effective as it used to be, due to a recent change in the product’s formula. However, we could not find any information related to this change, or when it even occurred.

We always hate to see supplement companies use proprietary blends, as it’s an easy way to sneak ineffectively low doses of ingredients into supplements. Thus, there’s no way for us to know if either of NV Clinical’s formulas contain enough of any of these ingredients for them to actually be effective.

If you’re only considering diet pills with natural ingredients, check out our top 10 list to find some.

NV Clinical doesn’t seem to result in any unexpected side effects, at least not according to reviews written by people who have tried it. However, it does have a lot of caffeine, so it might give you the jitters.

NV Clinical seems relatively safe to use, and shouldn’t result in anything more than minor uncomfortable side effects.

Striclty speaking NV Clinical’s list of ingredients is unimpressive. It lacks many of the weight loss staples commonly employed by other products like it, choosing instead to replace them with super fruits that, while beneficial to your health, won’t really result in any weight loss whatsoever.

NV Clinical is a weight loss supplement produced by Wellnx Life Sciences. While NV Clinical claims to be capable of providing you with the fastest weight loss on the market, the product’s ingredients do not back up this claim. Considering that it offers nothing but healthy super fruits, it seems likely that NV Clinical can really help you lose very much weight at all.

Forget about working fast… we don’t think NV Clinical can even really work at all. If you want to lose weight, you’re going to need a supplement with a more powerful formula than one such as this.