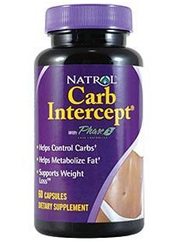 Carb Intercept is a product marketed by Natrol that is allegedly capable of helping your body better utilize fat and energy by affecting your body’s absorption of carbs and starches. As the name of the product implies, Natrol is apparently capable of helping you lose weight due to the inclusion of White Kidney Bean Extract, an ingredient that may possess the weight loss properties that Natrol claims its product to be capable of.

Of course, many products claim to be the best there is at helping your body to better deal with the things you put into it. Why should you choose Natrol over the other products that offer similar claims and weight loss results? Let’s take a look at Natrol’s Carb Intercept product and see if it can stand up to the competition, or if it’s even effective at all.

Carb Intercept is manufactured and distributed by Natrol, LLC. Natrol is a 35-year-old company that claims to be highly regarded and respected by the weight loss and health communities alike. The official Natrol website offers a phone number and email address as forms of contact, but does not list a physical address for the company, which is apparently located in Chatsworth, California.

Natrol claims that their Carb Intercept product to be capable of reducing the number of calories your body absorbs from each meal by inhibiting the actions taken by enzymes in your body that are responsible for breaking down starches and storing them as fat. The result is less calories being absorbed by your body, the result of which can potentially mean weight loss. Carb Intercept is also alleged to improve the way your body turns proteins, fats and carbohydrates into energy by transporting glucose from your blood stream into your body’s cells.

Unlike other weight loss companies that will plaster their website with positive reviews that are obviously fake and biased, Natrol actually allows people to leave their own reviews of their products on their official site. Unfortunately for them, the majority of reviews for their Carb Intercept product are overwhelmingly negative. Most users seem to be very disappointed by a lack of results, and while some positive reviews do exist, the product currently has a rating of 2.3 out of 5.

The active ingredient that allegedly gives Carb Intercept its weight loss capabilities is its Phase 2 Carb Controller Complex, which is comprised of White Kidney Bean Extract, a branded form of Chromium and Dibasic Calcium Phosphate. White Kidney Bean extract is allegedly capable of neutralizing carbohydrates found in starchy foods, while the other ingredients in the Complex inhibit enzymes in your body and transport glucose from your bloodstream resulting in the weight loss effects explained above.

There are not too many side effects known to be associated with use of Carb Intercept, but some users have reported experiencing excessive gas.

Natrol’s Carb Intercept product is relatively inexpensive, and unlike many weight loss products you can actually buy it in stores.

If this product has been clinically proven to effective Natrol makes no mention of it on their official website and provides no evidence that the product has even been tested at all. Most of the information regarding Carb Intercept actually points towards the conclusion that the product is not effective at all, at least when you consider all of the negative reviews that can be found on the product’s own official website.

White Kidney Bean Carb Intercept is a product offered by Natrol, that the company claims can help users lose weight by reducing the number of calories and carbohydrates that their bodies absorb from starchy foods. However, the effects of Carb Intercept have not been clinically proven, and due to many negative reviews the product only holds a rating of 2.4 out of 5 on its parent company’s own official website.

You really don’t need to do much research to know that Natrol’s White Kidney Bean Carb Intercept is far from the best product on the market. All you need to do is look at the user reviews on the product’s own official website to see that disappointment in Carb Intercept is so common that the product only holds a rating of 2.4 out of 5 on its parent company’s own site. While it’s nice of Natrol to offer honest reviews of its product, unfortunately they all lead to one conclusion: you should not buy this product.