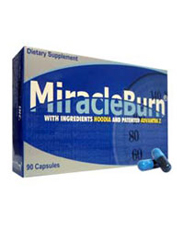 MiracleBurn Review: Is It Safe?

MiracleBurn is showcased as a appetite killing weight loss supplement that is functional only with diet and exercise.  It’s intended to work at a slow pace because the manufacturers feel a slow change is the healthiest way to lose fat.

Giant changes are not offered by this supplement though it does mention it can sustain weight loss. Can it actually do what it says?

Run by a New York based company entitled Urban Nutrition that has marketed a facial cream and health supplements. Oddly enough they say their formulas were created by a Dr. Hans Nieper who died in 1998, the company profile says they began business in 2001. This Dr was controversial for telling cancer patients they could cure themselves with vitamin A.

Another disturbing fact is that there’s multiple webpages with scathing reviews against this companies practices. Many people have been charged on unshipped items and have dealt with rude customer service. The recurring complaint is  people mentioning this company works like any other scam.

The most prominent ingredient Advantra Z is intended to increase metabolism and give one the energy to perform in the gym. Another extract is meant to fool the mind into thinking it is not as hungry.  Fibers are added that also promote a stuffed stomach.

Additionally there’s an addition of Iodine to help stimulate the thyroid which leads to more weight loss.

Their claims are that results will be noticeable by people in weeks. Unfortunately the manufacturers have neglected this product’s mention on their website beyond an order form without explanation of its use.

It is unknown if clinical trials were ran or if what third party sellers say is true.

Once again there’s no mention as to what’s inside of this in exact amounts. For a comprehensive ingredient list look no further than these easy to read descriptions.

There’s a full explanation offered  for most of their ingredients.

There’s a lot of baggage associated with this brand.

It’s not often you hear of several customers referencing the exact same problem with the manufacturer’s practices. Every review has mentioned that their free trial was charged even after early cancellation and clear notification that it wouldn’t be a problem. There’s a lot to lose here in spending your hard earned money and time to fight a company with repeated customer complaints.

Another problem is their own website doesn’t even support the brand. They offer a sheet to fill out for purchase but no explanation of functionality is given. This makes it hard to check and see if the third party sellers are selling an accurate description. This type of work should not be done by the customer and instead the sellers should provide a full listing.

There is a huge proprietary blend consisting of 10 different ingredients and all of which can overstimulate the body or cause an array of side effects. To have fiber and stimulants of unknown quantities to your diet can be very disastrous. You wouldn’t even know what ingredient is causing the problem only that you should quit use of this brand. It’s just unsafe to take in unknown quantities of ingredients.

Though it is good this product mentions it doesn’t offer big changes, it’s still a wonder if it can have any benefits. There’s too much at stake in risking taking in mysterious amounts of additives. Also the fact that customer service is panned by customers and that people have been fined for products they either returned or thought were free is a nagging issue. To have so many customers repeatedly say the same things is a red flag that should not be avoided.

Instead of taking advice from a company that has repeatedly angered customers, find solutions that offer great feedback and support for your needs.

Take into consideration how even the company behind this product neglects their own brand. Don’t fall into a potential trap that many customers have faced, instead look after yourself and find trust with a company with a good track record.