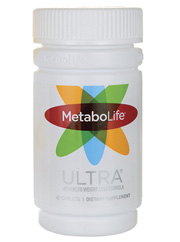 A few years ago the name “Metabolife” was associated with a much different product. Made with ephedra, a dangerous ingredient known to be similar to methamphetamine, the Metabolife brand has since been overhauled and bought over by a new company entirely.

The new Metabolife brand markets a whole different set of products that are ephedra free and are claimed to help people lose weight with diet and exercise. There are different Metabolife products available, but today we will be focusing on Metabolife Ultra. So does this product really work?  We decided to find out.

Metabolife Ultra is manufactured by Twinlab, which has offices in New York and Michigan, as well as a facility in Utah. Twinlab is known not only for producing weight loss products, but nutritional and fitness supplements as well. Metabolife Ultra can be purchased on the company’s official website, as well as third party retailers such as Amazon.com.

Metabolife Ultra has a new formula, which is claimed to be an upgrade. This new formula includes a patented herbal blend called Meratrim, garcina cambogia and Chromate which is also patented. From this there were two similar studies that were done on Metabolife Ultra, and results found that people lost more weight and saw their BMI decrease more than with diet and exercise alone, with a reduction in hip and waist size in some cases, in only 2 weeks. To see similar results, users are instructed to take 1 caplet 3 times a day a half hour before meals and include diet and exercise into their routine.

While the results from the study sound good, some users only reported an energy boost, while other users saw no results at all.

Metabolife Ultra contains a variety of ingredients that are claimed to help people lose weight in an efficient manner. However it should be noted, that garcinia cambogia has been shown to be ineffective in helping people lose weight. Another ingredient, chromium, has also been shown to not be effective either. Also includes the patented Meratrim blend, which is made up of sphaeranthus indicus and garcinia mangostana. If you are more interested in diet pills with all natural ingredients that are proven to be effective, check out the top 10 list.

Unlike the product that preceded Metabolife Ultra, which had a higher dose of caffeine, this product lacks that. As such there have been no side effects reported from use of this product.

Metabolife Ultra can be purchased on it’s official website for $24.99, which is pretty cheap in the diet pill world.

Another dud ingredient listed on the packaging is garcinia cambogia. Although made popular by Dr. Oz, studies have shown that this ingredient actually doesn’t help people lose weight. This is despite the HCA that is contained within garcinia cambogia. Just because someone on TV says something good about a substance, that doesn’t necessarily make it true.

Lastly, there is no diet or exercise plan included with this product. This can be especially troubling for people out there who are new to the weight loss world, and lack a sense of direction as to what proper diet and exercise look like. To them, it might seem that all they need to do is take the caplet and everything will change, which it may not.

The Metabolife brand is not what it once was. However even with a completely new ingredient list, it is questionable if Metabolife Ultra really works as well as it says it does.

Metabolife Ultra is no longer made by the people who put amphetamine-like substances into their products. Yet the name itself may still turn people away. But if people saw past the misleading label, they would find a different product entirely. The thing is, even though it is different, that doesn’t mean it is effective.  There are other diet pills out there that can help you reach your weight loss goals. The Metabolife brand has cleaned up it’s image, but it’s still questionable if it will help people lose weight.

We recommend looking into other, more effective diet pills.