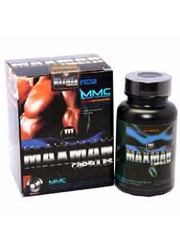 Maxman Review: Is It Safe?

Maxman is a brand of Chinese-manufactured single-use male enhancement pills. They make a number of bold claims about their product’s effects in their promotional materials, including that it can enlarge both the width and length of the user’s penis.

They also say that it helps consumers achieve harder erections that last longer and recharge quicker after orgasm. They say that it can begin working as soon as ten minutes after application, and that its effects last for up to 168 hours.

The male enhancement product that has seen the most measurable results in its users is Viritenz. It is a daily nutritional supplement that encourages the body’s natural sexual functions, helping users to have better erections, orgasms, and sexual experiences in general. Click here to see all of the ingredients that go into Viritenz’s potent proprietary formula.

Maxman is produced by the Chinese drugs and pharmaceuticals manufacturer MME. They also sometimes list their name as MMC, and there is very little English-language information about the company and their history in China.

There is quite a bit of information about their legal issues as soon as they started exporting their products to America, the European Union, and other countries that have stricter manufacturing and testing standards. Numerous regulatory agencies have discovered drugs included in Maxman that were not listed in the label.

These chemicals, most frequently sulfoaildenafil, tend to be less effective and less safe versions of the prescription erectile aid that’s found in Viagra. The major issue with this is that sulfoaildenafil can potentially have a number of very serious side effects in general, and some very specifically negative effects on people with heart and blood pressure issues, especially those that are taking certain forms of medication.

The issue of male enhancement companies using low-grade erectile aids without telling their customers has gained more attention recently after several men died after not realizing they were taking products that interfered with their heart medications. Other men have had heart attacks, strokes, fallen into comas, or simply lost consciousness or developed headaches and nausea.

This is an issue with a number of Chinese exporters in particular, who take advantage of China’s relaxed manufacturing and advertising standards to produce products that do not meet the standards of most other countries’ food and drug regulations. Other brands that have been caught including sildenafil knock-offs include African Superman, Stree Overlord, and the Rhino line of pills.

Maxman is also one of the more expensive options available to customers. They are not available through any of the more respected supplements distributors, such as Amazon or GNC, but instead can only be found through lesser-known and potentially less trustworthy sites like Best China Pills and Great Miracle Health.

The prices for Maxman can vary radically, but even at its cheapest it will always be more expensive than the vast majority of legal daily supplements. In general, potential customers should expect to pay between $2-$4 per pill, which is high even for one time use products.

Follow this link to see more reviews for the top male enhancement products on the market today.

According to the limited information that Maxman offers in their promotional materials about how it is supposed to work, it is mostly just a circulatory aid like many other male enhancement products. Circulation is a key factor in erectile functionality, as the easier it is for the genitals to have access to the blood flow that they need in order to attain erection, the harder and longer lasting their erections are.

They also claim that their product can increase the length and width of users’ penises. While there is a reasonable chance that it may impact erection size, there is no way that and herbal product can permanently grow the tissue of the penis.

Click here to learn how to choose a male enhancement product that has the best chance of improving your sexual performance.

Assuming that the ingredient information that is currently provided on their labeling is correct, Maxman uses a blend of herbs and amino acids in their proprietary blend, some of which are effective and highly recommended, and others that are considered dangerous, ineffective, or both.

Side effects that can potentially result from consuming too much epimedium can be mild, such as headaches, vomiting, and bloody noses, or they can be very serious, including heart attacks, strokes, and death.

Saw Palmetto Extract: A tree that was originally cultivated in the Southern United States that can help treat erectile dysfunction in people that have ED due to an overly swollen prostate. In other users, however, it has been shown to potentially cause erectile dysfunction. Saw palmetto is not considered a recommended additive according to our team of experts.

L-Taurine: An amino acid that also has a stimulatory effect. Taurine is found in energy drinks and other stimulant products, often times paired directly with guarana.

To see the top ten list that our experts have compiled for the best male enhancement products available on the internet.

The massive quantities of stimulants in Maxman will almost certainly have a pro-circulatory effect, which will then benefit the frequency and rigidity of its users’ erections. This is not the most recommended way of improving erections, however it is often successful in many people.

Maxman has also been found at different times to contain hazardous illegal drugs. The effect that the combination of so many different products could have on the heart is very disturbing.

Despite their advertising claims, there is no logical reason that a person should think that Maxman could possibly increase their raw penis size. This is not possible through nutritional supplementation.

Click here to see more information about how to maximize your sexual effectiveness.

Maxman is a pill that is designed to be taken before sex that increases circulation. They claim that it can also improve penis size and other sexual performance metrics, however this is unsupported by any sort of data.

Their manufacturer has been in legal trouble for including controlled substances in their blends and not labeling them. Not only is this against the law in most countries, it is amoral and dangerous to their clients.

Maxman will not be as effective as a daily male enhancement product that also has some form of testosterone support, however it is far more dangerous and expensive than the vast majority of products of this nature.

The male enhancement product that has established the best reputation within the industry for effectiveness is called Viritenz. It is a daily nutritional supplement that encourages the body’s natural sexual functions.

It can help men achieve and maintain better erections, have more satisfying orgasms, and increase the pleasure for themselves and their partners. Click here to read more about all of the benefits that Viritenz can offer their users.