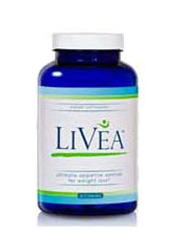 Made popular by The Biggest Loser season 3’s Kai Hubbard, LiVea claimed that it could help it’s users lose weight while at the same time suppressing hunger cravings. When including a diet plan and exercise into the mix it is claimed that results were eminent.

Ultimately LiVea was discontinued as it’s product was shown to be nothing more than a scam. So what was this product, and what did it say it could do? We decided to looking into it so that you can be more aware of what to watch out for in other products.

It is not certain who the maker of LiVea was. When diet pill companies hide their identities, it’s a sign that you should be very wary of their product. If they are trying to hide their own identity, what’s to say that they aren’t hiding more than just that? LiVea is no longer available for purchase on the market.

LiVea claimed to suppress appetite as well as help it’s users burn fat. There were no clinical studies done on the ingredients nor on the product to support these claims. Regardless, LiVea instructed people who bought the product that they should take seven capsules, either in the morning or after the day’s biggest meal. This it was claimed, would guarantee weight loss.

And yet despite sounding full proof, many people did not see the results they desired. There were even reports that the hard to swallow capsules were not absorbed into the body at all!

While advertised as filled with all natural products, it should be noted that what was included in LiVea is not necessarily known to help with weight loss. This is a common trick that diet pill companies use; hide behind the word “natural” and wait for people to start buying their product because they believe it will work. Diet pills on the top 10 list avoid this practice.

LiVea claims that it has no side effects unlike it’s stimulant based counterparts. However there haven’t been enough reviews of this product to make certain of it’s claims.

Unlike other diet pills out there, LiVea contained no stimulants, which also meant no side effects such as insomnia, headache, jitteriness or diarrhea.

LiVea liked to promote that it’s product contained all natural ingredients, which was true. However, there was no proof that any of these ingredients actually helped with weight loss. Some of them may help with other maladies, such as preventing cancer, but that’s not supposed to be the purpose of an ingredient in a diet pill! There were no studies to back up anything that LiVea claimed it can do, neither of it’s ingredients nor of the product itself.

There were not many positive reviews of LiVea when it was available, with reports that not only were the capsules hard to swallow, but that they could be later expelled in the bathroom fully intact, not having been absorbed into the body at all!

LiVea was also known as a company that gave out free trials in return for credit card information from it’s buyers. This is a known tactic of companies that are looking to scam people; lure them in with a free trial, then later add  an auto-shipment. Many other companies have done this tactic and have been shut down as a result.

Be wary of companies that offer free trials for their products. Often their claims to suppress appetite and to help with weight loss are nothing but thin air.

Like many other diet pills, LiVea claimed to offer it’s users a solution to their weight loss woes. With a reality TV star known to be using it, it seemed as if this was a legitimate product after all. However if there is any lesson to be taken from this, it is to research the ingredients of the product! What was contained in Livea actually had no proven effectiveness in helping people lose weight. Clearly it was never as effective as other diet pills. As such LiVea is now a thing of the past, only existing in diet pill review sites.