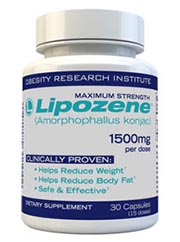 Lipozene Warning Review: Is It Safe?

Weight loss supplement claiming usage by millions of people. Marketed as an all natural pill with patented formula, they argue weight loss will come solely thru two blue pills before every meal without exercise or diet.

With a proclaimed 78% of weight loss in the form of fat and the rest being water and muscle. No evidence is provided to back up these claims.

This company was fined for unfounded claims of fat loss, including a class action lawsuit by its hometown city.

Obesity Research Foundation, based in the San Diego area. There are many different dosage ratios ranging from the quantity of pills and milligram strength in their supplements on Amazon. Their official website only offers a thirty dollar trial package with a free bottle of Metaboup. Chains such as GNC, Walgreens, and other small supplement stores sell this product. Commercials typically play during daytime hours.

Glucomannan is the sole active ingredient; a polysaccharide found in some plant cell walls. This dietary fiber gel leads to a fuller stomach making the capacity for more foods difficult to ingest.

There are mixed results online with the vast majority saying that this product only works in conjunction with a healthy diet and regimented exercise. Even those that reported results mention it leads to upset stomachs and severe increase in bathroom usage.

The Konjac root used contains only Glucomannan which is said to be a pure dietary fiber source with an all natural satiation boosting effect.  There is no global watchdog group testing the potency and safety of Konjac so taking this pill is a gamble. If you are interested in learning about a diet pill that is derived from natural ingredients, please read the top ten list. The website proclaims there are no side effects on every page but even on their own page on the “ORI settlement” link there is a class action lawsuit in full affect that states their claims of fat reduction and safety are unfounded.

There are also inactive ingredients such as food coloring, and titanium dioxide; both of which can cause allergic reactions.

The website claims there are no side effects but clinical trials have shown Side Effects Include: stomach discomfort, diarrhea, constipation, and blocking of the throat, esophagus and/or intestine.

Full refunds are offered in 30 days and Lipozene is reduced to half its price on Amazon.

Their website makes grand claims of being able to reduce body fat without exercise, but there are several websites where these claims are quickly refuted. In fact even on their own website in the ORI settlement they have been served a class action lawsuit demanding they refute all claims of fat loss since trials have shown the opposite of their grand assumptions of fat loss.

In 2005 a 1.5 million fine was handed to this company by the Federal Trade Commission for faulty claims.

Even their repeat customers mention it is only effective with a strict diet and exercise regimen. Also many of the positive reviews on Amazon are from people who only have one review and no history of product use beyond this brand.

The only real evidence highlights that this companies claims are unfounded in reality. The history of class action lawsuits and shady business practices showcases that this company is habitually lying in order to turn a profit.

The price point for this supplement is high considering there is only one ingredient which can be purchased purer and cheaper elsewhere. At two pills before every meal and only 30 capsules per $30 bottle, it would average over $200 dollars a month for one single ingredient.

It’s easy to see, this company consistently lies to its own customers. Their record of class action lawsuits and history of unfounded claims are rampant. Even their own site shows they have a class action lawsuit refuting their clinical studies and stating there is no evidence supporting their effectiveness.  There are plenty of products out there for the same price (or less) that are actually effective.

Also with only one ingredient in their pills why would you overpay for an ingredient you can buy in bulk for much cheaper?

It’s easy to make giant claims and say you have millions of followers, but after a quick Google search, it’s easy to see there is no truth. The only truth is a history of federal lawsuits stemming from fabricated claims.

If you want the real thing feel free to look at other diet pills that may be more effective and better for you.