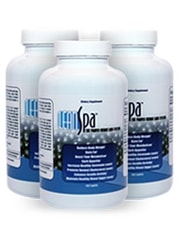 Always be careful of who you trust. In the diet pill world there are a lot of scams out there, looking to take money from easy targets. They’ll sound really good at first, until later when the facade is dropped and you see them for what they really are. Today we will be going over one of these scams, which went by the name of Leanspa.

Leanspa claimed that it’s users could not only lose weight, but burn fat, boost metabolism as well as other benefits. All these fantastic claims were based on nothing, but the people who bought the product didn’t know. No longer in existence, we will look into this product so you can be more aware of what to watch out for to make sure you too aren’t signing up for a scam.

Leanspa was not only the name of the product, but the company that produced it. From there Leanspa was managed by another company called LeadClick Media. Although it had a very convincing website, Leanspa was in fact a scam. It would use fake review sites to promote itself and trick people into buying it’s product. Unbeknownst to them, buyers would be set up in a auto-shipment program. Today Leanspea is no longer available on the market.

Leanspa made some huge claims about what it was able to do. Not only did it claim to help with weight loss, but also burn fat, reduce belly fat, suppress appetite, boost metabolism and help improve muscle mass. So many promises, such a great product this seemed to be! People would buy the product, but many would fail to read the fine print: The free trial only lasted 2 weeks, and if they didn’t cancel their membership as well as return the bottle, the auto-shipment would start.

Despite it’s claims, many users didn’t see the results they wanted. This is when they tried to return Leanspa and then became aware of the auto-shipment program. And where many people lost money, Leanspa raked it all in, like a giant pile of leaves on an autumn day.

Leanspa liked to market that it was filled with all natural ingredients, much like diet pills on the top 10 list. While true, that didn’t necessarily mean that the ingredients were an effective form of weight loss. To those who didn’t know any better, this still seemed like a deal with the free trial that the product offered.

When this product was on the market, there were no known reported side effects.

Even though it was a scam, at least the product that was being sold didn’t cause any side effects.

Included in Leanspa were three ingredients that while sounding good, actually were never proven to be effective in regards to weight loss. These ingredients included Acai berry, chromium and garcinia cambogia. Companies have liked to include these products because to the lay person the names sound effective.

The real problem however with Leanspa, is that it was a scam all along. People were lured in by fake review sites that would encourage buyers to try Leanspa out through it’s free trial offer. However soon after that they would be set up with an auto-shipment program that would soak up $80 of their hard earned money a month for a product that didn’t work. If that wasn’t bad enough, users found it incredibly hard to cancel these shipments.

However this all came to a head, when the FTC finally stepped in and put a stop to Leanspa‘s operations once and for all.

Leanspa is a classic example of what a scam looks like. Be wary of free trials, and aware of the possibility of auto-shipments.

Today if you search up Leanspa on the internet, what will come up first are a lot of results about refunds that the FTC made Leanspa make. Gone is the website with a vague ingredient list, with it’s study (of only 17 people) that was supposed to show that Leanspa did in fact work. Better diet pills avoid everything that this product did. All that Leanspa is now is a word, that when typed on a word processor, is seen as misspelled. And that is all it is ever going to be.

We recommend staying away from diet pills like this and looking into effective scam free ones.