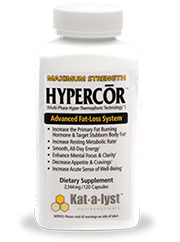 Hypercor Review: Is It Safe?

Created with the intentions of being an incredibly effective all around useful supplement. Currently the manufacturers are performing site maintenance so descriptions are limited to third party sellers and the bottle itself.

Their formula features a patented “Hyper Thermophoric Complex” which is just a fancy way of saying it does more than one thing to gain results. All together it has a lot to offer and it appears scientific on first glance. But how effective is it exactly?

Katalyst Nutraceuticals was conceived by Global Nutrition Health Inc.with offices in Nevada. They are a self described nutritional supplement consulting firm.

It’s unknown why they do not have an official website or company mission. Some sites suggest they have thousands of employees. It’s concerning to see no customer support unit to deal with potential complications.

There’s a whole host of claims. First it says it targets the increase of lipase which makes it easier for fat to be used as an energy source instead of adding to body fat. This process also leads to more oxygen leading to less weight.

Another formula says it can elevate mood which in turn reduces stress.The body then is allowed to break down fat instead of focusing on alleviating tension.

Glucose is then ramped up and serotonin reduced to trick the body into thinking it’s full.  Metabolism is additionally increased with increased temperature which burns calories even when not exercising.

It’s important to note that this product aims to change brain chemistry as well as work within vital organs. Often when altering your body’s reaction to things it can have complications that require fast action on your part.

Customers have also reported a spectrum of possible results from no change to having negative side effects.

There’s a ton of ingredients, many of which are lumped together into a proprietary blend. It’s unknown how much of each individual ingredient you will receive. Supplements are circulating now that have a breakdown of their full ingredient list.

It contains some B and C vitamins.

There’s an interesting use of scientific sounding language of how this will change your brain and make your body trick itself. By tampering with your brain’s chemistry there is a whole host of potential side effects that this company has yet to test for.

Also concerning is the shield of a proprietary blend making it hard for customers to accurately dose. How is someone supposed to know the strength or possible interactions if they do not know the exact amount of ingredients? There should be a notification to customers so they know what exactly they’re ingesting.

Without a website to house their products this brand is letting third parties market their stuff instead of providing the real evidence. Seeing as how this formula brags of being scientifically engineered wouldn’t it be important to include  results? Thus far there are no studies provided making an informed choice impossible

Many customers agree the possible side effects and lacking results leave much to be desired.

Sometimes brands appear that confuse, making it seem like advanced science is used. After breaking down all the ingredients it becomes clear why so many customers left dissatisfied. There’s insufficient information available and the manufacturers do not provide a easy way to reach them. Considering they have several brands at the very least they should have a functional website instead of letting third parties promote their confusing brands.

A solution for weight loss should be clear cut and not be filled with  jargon that very few understand. More importantly you need a supplement that shows results.

By being aware of the alternative products out there you can make an informed decision. Further your weight loss goals and seek useful products within your grasp.