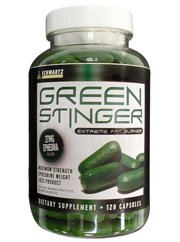 What is Green Stinger?

Some weight loss supplements and diet pills contain nothing but harmless mixtures of natural herbs designed to make you stop feeling hungry. But other supplements are made of powerful fat burners designed to whip your body into shape and help you shed pounds fast. One supplement that rests firmly in that second category is Green Stinger, a fitness product containing ingredients that are so powerful that they can actually be dangerous to use. So is Green Stinger safe? We decided to investigate Green Stinger so we could tell you the answer.

Green Stinger was created by Schwartz Labs, who continue to keep selling the product to this day. It seems like the majority of the supplements produced by Schwartz Labs all feature Ephedra, a controversial prescription-strength ingredient that isn’t legal in the United States anymore. Needless to say, we were concerned to see that Schwartz Labs were still selling products containing Ephedra. Whenever we come across information such as that, we start to get the feeling that we shouldn’t be trusting a company like Schwartz labs.

Thanks to its powerful ingredients, Green Stinger can allegedly suppress your appetite and boost your metabolism. Your metabolism is the part of your body responsible for turning the calories from the food you eat into the energy your body needs to function. But if you’re not active enough, it will stop turning those calories into energy and store them in your body as fat instead. By boosting your metabolism, Green Stinger can allegedly prevent this from happening, and even help you burn the preexisting fat in your body as well.

However, weight loss results don’t seem to be guaranteed – at least that’s what people who have actually tried this product indicate in reviews they’ve posted online. While the authors of some of these testimonials actually do seem to have lost weight, it seems like just as many people have not experienced any weight loss at all. This gives us further reason to doubt the product, even if its ingredients are as powerful as they appear to be.

Green Stinger’s formula is comprised of a mix of powerful stimulants designed to keep you feeling energetic and alert, as well as two key ingredients included to burn fat and boost your metabolism. While these key ingredients are believed to be very powerful, they’re actually two of the most dangerous ingredients on the weight loss market. Here’s what you need to know about the controversial ingredients that allegedly make Green Stinger so powerful:

Ephedra: this prescription-strength fat burner was outlawed in the United States after the Food and Drug Administration linked it to health products that were causing fatal liver damage. While Ephedra can still be found in weight loss products today, it is usually extracted from a different part of its source that is believed to be safer. However, this safer part of Ephedra’s source doesn’t any of the elements that allowed Ephedra to function as a powerful fat burner. This means that the Ephedra in Green Stinger is either effective and dangerous, or ineffective and safe. Either way, we simply just do not approve of the presence of Ephedra in Green Stinger’s formula.

Are There Any Side Effects?

The presence of Ephedra means that using Green Stinger could actually result in some pretty serious side effects, as the ingredient has been known to cause liver damage in the past. Products containing Ephedra have even killed people. Of course, there’s also the chance that the Ephedra in Green Stinger is benign and not actually a danger. Even if this is true though, Green Stinger still contains Bitter Orange Extract, which has been known to result in the same exact side effects as Ephedra. Either way, we believe that Green Stinger definitely possesses the potential to be detrimental to your health.

You can easily find Green Stinger online and can purchase it from a number of different supplement vendors.

Green Stinger contains two ingredients that look like huge red flags to us. Ephedra and Bitter Orange Extract are both possibly danger, and Ephedra is even illegal. You should never take any supplement that could possibly result in dangerous side effects, so you should probably stay away from Green Stinger.

There are better products available for the same amount of money.

Green Stinger is a health supplement designed by Schwartz Labs and intended to help you lose weight by burning fat and boosting your metabolism. Green Stingers ingredients are admittedly powerful, but they’re also pretty dangerous too. Green Stinger contains Ephedra and Bitter Orange Extract, and while the Ephedra may be benign, both of these ingredients have been found in other products that have caused their users to experience fatal liver damage.

With the sheer number of weight loss options on the market, there’s no excuse to use a product as potentially dangerous as Green Stinger. You can find a supplement that’s just as effective and totally safe.

Why not look into other diet pills that will be more effective and better for you?