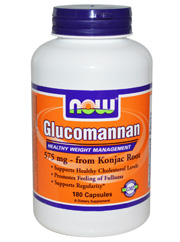 Glucomannan Review – Is it Good for Weight Loss?

So can this plant root really help you lose weight? Or is it just advertised to be more effective than it really so diet pill companies can make more money? We decided to look into this fiber and find out so you can make better decisions when you happen to come across it.

Glucomannan comes from the konjac plant, which is common in southeast Asia. It has been used for centuries not only for herbal remedies, but for food as well. More recently diet pill companies have touted this as effective in helping people lose weight, and as a result, various companies have started to produce this product on their own. Examples of these companies include Fiberweigh, NOW Foods and Nature’s Way to name a few. Glucomannan  is widely available and can be purchased either online or in stores.

The way that glucomannan works is that it needs to be orally ingested with water. Once it has been ingested, the fiber expands within the stomach while at the same time absorbing water. This in turn makes the user feel full. In addition to this it also has a low calorie content, as well as it helps block the absorption of fats and protein as well, much like other fibers.

Despite what diet pill companies may brag, there has been some controversy as to the effectiveness of this plant root. Some users have complained that glucomannan is not as effective as is advertised.

Glucocamman is a water soluble fiber that is a straight-chain polymer that has slight branching. It has sugars inside of it that include D-Glucose and D-Mannose that are in a ratio of 1.6:1. Glucomannan is also a constituent of plant, yeast and bacterial cell walls, with the differences between them being in the glycosidic linkages or in the branches that are in the linear structure. If you are interested in diet pills that have all natural ingredients such as this, check out the top 10 list.

Glucomannan is known as a diuretic, and may also cause diarrhea as a result. This plant root has also been known as a choking hazard when ingested in tablet form. In addition to this, glucomannan may disrupt blood sugar levels, which means we cannot recommend this fiber to people who are going through surgery or who are diabetic.

Glucomannan comes from a plant, so it is an all natural product. This may be good for people who feel uncomfortable consuming laboratory made synthetic products. Also glucomannan is widely available and relatively cheap.

When ingested without water or in tablet form glucomannan can be a choking hazard. Because of this people who have problems with their esophagus need to be especially aware that they should stay away from this fiber. In fact this problem is so bad, that Australia officially banned this plant root from being used at all!

Glucomannan also may effect blood sugar levels within the body. This can be particularly troublesome to people who are either diabetic or who are going through surgery.

There have also been a number of lawsuits against companies that have put glucomannan into their diet pills. This is because people argue that the companies made glucomannan seem more effective in helping them lose weight then it actually was. The amount that was won on the side of the consumers totals to $1.5 million! Clearly there’s something wrong with this plant root if so much money was won against it.

Just because diet pill companies can say an ingredient in their diet pills is effective, that doesn’t always make it so. In fact if you are not careful with glucomannan, not only can you choke on it, but it could mess with your blood sugar levels as well.

A common trick that diet pill companies use to get people to buy their products, is to say that what they are selling has natural ingredients. Such is the case with glucomannan. Despite being natural, that doesn’t mean that it is necessarily 100% safe or effective. From the choking it may cause to the blood sugar levels it may disrupt, there’s more negative aspects to this fiber than meets the eye. There are other dietary supplements available that are much safer and more effective. Glucomannan may make you feel full for a little while, but it is questionable if it will actually help you lose weight.