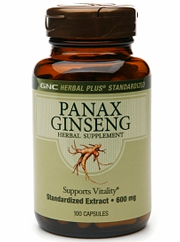 Ginseng Review: Is it Good for Weight Loss?

Ginseng comes in 3 different strains from Asian, American to Siberian strains and they all are intended to serve a different purpose. Asian Ginseng has reported weight loss benefits that occur due to the stated purpose decreasing hunger and breaking down carbohydrates easier.  Of course when satiated there is less calories taken in, this is what some believe to be true.

This ingredient has a long history of use by the Chinese and Native Americans. It is believed to be useful for many afflictions and it is often reported as a folk medicine staple. Some of the reported uses include energy stimulation, blood pressure regulation, weight loss and even endurance increase.

You can intake this thru either capsule form or even  liquid vials.  It is very rare to get the root in whole as it is very pricy in its purer form. Due to its wide availability and popularity it’s even more more important to distinguish what people claim does, and what it can actually do.

Let’s take a detailed look inside of Ginseng.

Several manufacturers either market Ginseng solo or have it as an additional additive in supplements. Particularly used in order to reap the benefits of its stimulation of the body and it’s believed to improve mental sharpness.

Currently there is not a regulated or known safe dose level so manufacturers throw it  in their product in varying strengths. Due to it being very expensive, many manufacturers either dilute or exaggerate the amounts listed.

Currently brands sell this product in  generic bottles with just Ginseng in it. It is widely  available wherever supplements are sold.

Inside this root are phytoestrogens that work very similar to regular estrogen. Estrogen may work to reduce bad cholesterol while raising good cholesterol

Also inside are Ginsenosides which are unique in the structure of Ginseng . So far no known benefits to humans are known about this byproduct . What is known in animals is that it is not easily absorbed thus rendering it potentially useless.

It’s important to watch over the intake of Ginseng as overdosing on it is possible. Symptoms that may arise include seizures and convulsions.

Currently Ginseng does not have much reported scientific evidence justifying purpose. The research has been limited, however to satisfy demands for a weight loss product we recommend tried and true approaches to all natural progress.

There might be temporary positive effects on memory. Also it is widely distributed making it a cash crop beneficial to economies.

Since there isn’t much evidence to support its use and it isn’t well regulated to test for strength and dosage levels, it becomes hard to embrace it as a wonder supplement.

There’s a long history of use but still there isn’t any actual data that shows this product actually works. Due to the possibility for numerous side effects this unanswered question becomes especially alarming. It then quickly becomes an issue of a potential loss of money or at worst a side effect laden product.

Some medical professionals argue that use should be stopped after a few weeks due to complications. Of course this isn’t a certifiable demand as not much is really known about the effects and long term consequences.

There have also been reports by watchdog groups that the reported levels of Ginseng in many products is either not accurate or completely missing. One might consider wanting to supplement with the real root but it is very expensive and as mentioned results are not promised.

While there has been a history of use for folk medicine, real science has yet to show much results. At the current state of this ingredient it becomes hard to accept it as a valuable tool for weight loss. Taking it on a whim also does no good as side effects may occur and there is the issue of not knowing if what you buy is actually in the amount thats labeled. This product lacks a lot of evidence however it is still quite popular and it is considered the most known herb in parts of the world.

Ginseng has a lot of reported benefits, unfortunately these benefits have yet to been proven. However in finding a properly functioning item for weight loss there are more reliable and affordable supplements.

In the quest for all natural products it’s not enough for it to be popular, it needs support to back its use and it can’t have major potential side effects. Options for weight loss are available to you even easier now , with all the questions you have answered.