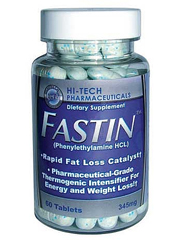 Fastin is a diet pill that claims to help users burn fat and feel great, due to its weight loss properties and its mood improving capabilities. It is intended to be used alongside a healthy lifestyle of diet and exercise. The official Fastin website describes the product as an appetite suppressant with the ability to affect your central nervous system, resulting in reduced hunger and a better mood.

While Fastin claims to be special, it seems to function quite similarly to a wide variety of other weight loss tools currently on the market — many of which are nowhere near as effective as they claim to be. Let’s take a closer look at Fastin and see if it’s the real deal or just another pretender.

Fastin‘s official website explains that the product is designed to be taken twice a day, at breakfast and again at lunch. The website also advises against consuming the product at night, explaining that it may disrupt your sleeping schedule or even result in insomnia.

Fastin is a version of the generic drug known as Phenylethylamine, which is a kind of appetite suppressant known as a sympathomimetic amine. The way sympathomimetic amines function is similar to the way amphetamines work: they affect your central nervous system to suppress your appetite. The intended effect is to leave you feeling full so that you eat less. Fastin also claims that its effects on your central nervous system will increase your metabolic rate, as well as the release of Dopamine and Norepinephrine, neurotransmitters that affect your mood and cognitive abilities.

Various user testimonials and reviews of Fastin can be found all over the internet. While Fastin’s official website is sure to provide only positive testimonials, other users on less biased weight loss sites have reported varying levels of success with Fastin. Some claim the product to be ineffective while others have complained about unpleasant side effects.

While Fastin claims to be safe, users have reported encountering a decent amount of unpleasant and hazardous side effects. These side effects range from more minor issues such as dryness of mouth, diarrhea, irregular bowel movements, insomnia, dizziness and headaches, to much more troubling concerns like elevated blood pressure, heart palpitations, an over stimulated central nervous system and even (rarely) psychotic episodes.

Fastin offers free and quick shipping on all orders, promising to deliver their products within three or four days.

Fastin’s official website claims that you can safely take Fastin for as long as you want, until you reach your desired weight. However, the Phenylethylamine in Fastin is actually habit forming, which means that Fastin should really only be used as a short-term weight loss tool.

Fastin’s official website also claims Phenylethylamine to be the “cleanest stimulant known to man,” but makes no effort to elaborate on what that means at all.

Fastin seems to be very similar to a lot of other products currently on the market, largely due to the presence of the sympathomimetic amine Phenylethylamine, which has the same effects on the body’s central nervous system that many other weight loss products claim to have. However, the business practices of its parent company have been called into question by the Food and Drug Administration and the product’s official website even contains some contradictory information.

While Fastin has apparently helped some of its users lose weight, it is ineffective without a healthy lifestyle of diet and exercise and does nothing to distinguish itself from various other sympathomimetic amine-based weight loss products on the market. Add this to the drug’s nasty side effects, as well as the fact that Fastin’s parent company has faced action from the FDA for making misleading statements regarding Fastin’s effectiveness, and it’s clear that Fastin is far from the most reliable weight loss product on the market.