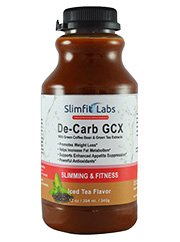 What is De-Carb GCX?

Initially there may be some confusion as to what the right De-Carb GCX product is, as there are two companies that sell the same product. A little research however and you will find the right one is De-Carb GCX by Garden’s Creation, which claims to suppress appetite, raise fat metabolism as well as boost energy levels.

Unlike other companies that sell diet pills or gummies, De-Carb GCX comes in a powder that is mixed with water. So is this product really as effective in helping people lose weight as it claims? Or with a price of $99.99, is this nothing more than an overpriced powder? We decided to find out.

De-Carb GCX is manufactured by Garden’s Creation, which has its headquarters in Valencia, California. Unlike other companies that have an entire About Us page dedicated to talking about what makes their products so great, Garden’s Creation has but a single paragraph, talking about how they have a state of the art facility and will ship directly to you. De-Carb GCX can be purchased on the company’s official website.

De-Carb GCX works by balancing glycemic levels, while at the same time blocking the absorption of carbohydrates. The green tea extract that is in the product is also claimed to help accelerate the rate at which fat in the body is metabolized. Lastly the green coffee beans that are added into this mix will help mobilize stored sugars for energy, which also results in burning fat. To see results, users are instructed to mix 1 3 gram package of powder with 8-12 ounces of water 20 minutes before each meal, 2-3 times a day.

Although marketing itself as foolproof, there have been users who have reported seeing no weight loss at all from this product.

Although there are a total of 8 ingredients in this product, only two of them are known to be used to help with weight loss. These ingredients are green tea and green coffee bean. Despite being used commonly, green coffee bean is not as effective as it is claimed. The other ingredients that are used in De-Carb GCX are used either for flavoring or to help keep the product together as a whole. The other ingredients include: tea extract, iced tea flavor, lemon flavor, soluble fiber, citric acid and sucralose.

If you are more interested in diet pills and not powders that are filled with all natural ingredients, check out the top 10 list.

A popular ingredient in diet pills that is known for it’s antioxidants, as well as boosting metabolism and mental focus and clarity.

Made popular by television’s Dr. Oz to help with weight loss. Clinical studies however have shown otherwise.

This product contains green tea, which is known to be effective in helping people lose weight.

There may be some confusion when you search up De-Carb GCX, as there are two separate websites that claim to sell the product. One is from the company Creation’s Garden, but the other one is a company known as Hollywood Vitality. When looking on their website however, there is an identical picture as to the one seen on Creation’s Garden, just for a lower price! Some people may get confused as to which one is real, and in the end this can only hurt the real product.

There’s also the fact that the green coffee beans that have been added into this product have not been proven to be effective in helping people lose weight. Dr. Oz made this ingredient popular on his television show, claiming it’s effectiveness. Yet in 2023 other scientists retracted the paper claiming this, and Dr. Oz has since been made to stand in front of a senate subcommittee, where his company was accused of falsifying information.

So really, out of all the ingredients, that only leaves green tea to be known as effective in helping people lose weight. And with a price tag of $99.99, that’s a lot to pay for essentially what amounts to green tea plus some added flavorings.

After you read between the lines of the advertising copy, it’s obvious to see that there isn’t as much effective in this product as claimed. And for such a high price, it’s best if you spend your money elsewhere.

When one breaks down what is actually known to help people lose weight, the only ingredient in this product’s lineup that does is green tea. Everything else is a bit superfluous. And for a price tag of $100, it leaves something to be desired if you really are spending this much for a dietary supplement. Not all supplements are like this, many are much cheaper. Just because the price may be high for a product, that doesn’t make it effective. They can also just plainly be ripoffs.