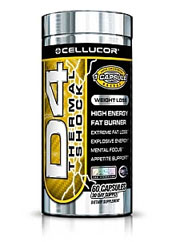 D4 Thermal Shock: Is It Safe?

What is D4 Thermal Shock?

Boasted on their official website is the claim this supplement can stimulate adrenaline function in order to deliver energy and concentration, on top of helping aid in removing hard to reach fat for people 18 and older that can deal with caffeine stimulation.

It does not mention the need to diet and exercise but this brand is marketed towards in shape people.

There are several grand claims attributed to this product, lets see what the evidence has to say about it.

The makers of the Cellucor brand are Woodbolt Distribution, LLC that is based in the state of Texas.  They sell a number of sports and nutrition supplements catered mostly towards athletes. Lawsuits have been handed to the company for the lack of purported safety in their ingredients and for patent infringement.

Manufactures claim this works by providing the body with the stimulation it needs for mental focus and by getting rid of body fat this product. It is meant to be a well-rounded weight loss and energy increaser. There is also the claim of it increasing metabolism and not leading to a caffeine crash.

Customers have provided mixed results with many saying it has lead to anxiety as well as restlessness. The rate of weight loss has also been questioned with several customers stating it does not provide any beneficial fat loss. Many of the claims of fat loss are from people who mentioned how they increased their gym and exercise performances.

Though their official website has no indication of what their ingredients do, another distributor has listed a very neatly and easy to understand profile.

There is 150mg of caffeine that is roughly a cup and a half of coffee a day. For an all-natural alternative that won’t give you a caffeine buzz, find all natural solutions here.

Offered from various retailers. Also was made to work with other brands from Cellucor.

Even to those who claimed fat loss mentioned the high rate of side effects such as jitteriness and stomach issues. The brand says it does not lead to that but customers seem to disagree.

Many of the ingredients have been proven to be unsafe in large amounts or in long-term usage and the brand lumps their formula without specifying the exact amounts. Without being able to track all these stimulants there is cause for concern.

Supporters of this brand who say they lost weight are on body building websites that already have very strict exercise regimens that most people don’t have time for.

With options that exist out there that aren’t laden with stimulants this brand would not be a good alternative. You don’t know the exact dosage of these potentially harsh stimulants. Since customers widely reported physical anxiety and unease it is a potential hazard.

Taking in a large amount of stimulants can be really hard on your body and can even diminish your quality of life. There’s no reason to add something to your diet that costs money and isn’t proven to be effective. Find alternatives that are all-natural and not chock full of crazy stimulants.

In this day and age you can’t trust a brand that claims one thing when customers say the exact opposite. Look at the information out there and make the right choice for your body and mind with supplements that can be better suited.