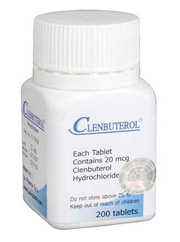 Clenbuterol Review – Is it Good For Weight Loss?

Some people use Clenbuterol for weight loss. Originally, Clenbuterol (full name: Clenbuterol Hydrochloride) was used as a decongestant. This steroid was given to asthmatic patients and those with bronchitis to give relief to their lungs. However, it was soon discovered as an alternative to the old weight loss drug ephedrine (popularly known as ‘phen phen’).

Although celebrities, body builders and even animals have widely used Clenbuterol to reduce fat and build lean muscle, it is illegal in the U.S. Not only is it illegal for humans to consume but animals are banned from ingesting it too. Yet, through the convenience of the Internet and easy access to the black market, Clenbuterol is still available to buy. Athletes such as Jessica Hardy, Erik Morales, and Katrin Krabbe were suspended when they tested positive for having traces of clenbuterol in their blood.

Veterinarians have used a liquid form of clenbuterol to treat respiratory diseases in horses and to relax uteruses in cows while giving birth to their calves. Not to mention, since the idea is to create lean and strong muscle, animal food used to contain a large amount of it until 1991 when animal consumption of it was banned in the U.S.

A generic compound, Clenbuterol is sold by a number of brands and under different names such as Spiropent, Dilaterol, and Ventipulmin. Brands like VPX and MilitantMuscle are sellers of “Clen”, a common name for the compound.

This steroid stimulates the Beta-2 receptors that speed up metabolism, burning new fat and causes the body’s core temperature to rise. The increase in body heat keeps the metabolism elevated, so the body then burns stored fat.

While Clenbuterol burns fat, it is also known to enhance athletic performance. The steroid acts as a stimulant, elevating heart rates and boosting energy to workout longer and stronger.

Clenbuterol is the main additive and there is a laundry list of side effects such as anxiety, insomnia, severe gas, nausea, vomiting, muscle tremors, high blood pressure, heart problems, and even weight gain.

These harmful effects have been the cause for concern and the reason why Clenbuterol is not prohibited in the U.S.

If you are interested in a more natural diet pill, please read about the top rated weight loss pills derived from natural ingredients.

The good thing is that Clenbuterol is a fat burning compound. Not only have celebrities and athletes used it, but also farmers actually mix it with their animal’s feed to promote lean muscle and eliminate fat.

Plus, the increase in cardio performance surges the ability to get fit, lean and healthy.

The biggest problem with Clenbuterol is the fact that it is banned in the U.S.

Even if one is interested in taking it, it’s actually illegal.

Since this diet pill is a steroid and a strong stimulant, it is recommended to seek consult from your physician to ensure it is safe. Even though Clenbuterol has been deemed safer than ephedrine, there are many negative side effects that go along with it. Headaches, anxiety, excessive sweating, shaky hands, insomnia, and hypertension have all been reported to plague some users.

Another big downside is that instead of suppressing hunger, it has actually increased appetite in consumers.

Long-term use of this steroid is highly discouraged and suggested not to exceed 4 months of continuous use. Plus, without the long-term, quick loss of fat may only be temporary. In many cases, users have gained weight back and reported that the drug negatively affected their metabolism.

For the same amount of money, consumers can do research to find a much safer and more efficient diet pill.

The U.S. has banned Clenbuterol due to its negative side effects and can only be obtained by purchase off the black market. Though it does heighten physical performance levels, increases basal metabolic rate (BMR), and quickly metabolizes body fat – it comes at a price. Not only is it hard to find, it can also be pricey and the health effects can be severely harmful.

Clenbuterol is illegal in many countries due to the harmful effects it has on humans as well as animals. Don’t let this discourage you, and find the best diet pill that’s out there for you.