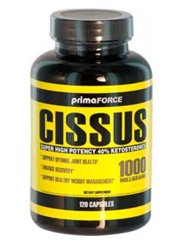 For centuries Cissus quadrangularis, also known plainly as Cissus, has been used in India for it’s healing properties. Known to help with bone fractures. Yet this is not the only use the plant has been known for, as it also has properties that may help with weight loss as well.

Cissus is a plant that is native to India, as well as Africa, Southeast Asia and Arabia. More recently it has been imported to the United States and Brazil. Being a plant, there is no one company that holds a complete stranglehold over the production and sale of Cissus. There are however companies that sell Cissus in supplement form. Some of these companies include Serious Nutrition, Primaforce, Absonutrix and Primaforce. Cissus may be purchased either from online retailers or from stores that sell nutritional supplements.

Although Cissus has been used for centuries, there has not been enough scientific studies done on the plant to understand how exactly it works in keeping people healthy. This may be attributed to the fact that conventional medicine has had a history of shunning traditional medicines for more modern ones. It is known however, that Cissus helps with bone health, as well as regulating cholesterol and metabolism.

While it may help with weight loss, it must be remembered that first and foremost Cissus is used for bone treatments. As such, it may not be reliable to depend on solely for weight loss.

When Cissus gets used in supplements, it is usually included with substances such as calcium, carotene A and vitamin C. These ingredients are meant to help strengthen bone tissue, which is why this is popularly used by athletes and people in the fitness world. Cissus is an all natural substance, much like the ingredients that go into diet pills that are on the top 10 list.

Adverse effects from use of this substance may include the following:

There has not been enough research done to know if there are side effects from long term use of this product.

Cissus is 100% natural and is known to help athletes as they recover from physical exertion.

Despite being around for centuries, there has not been a lot of research done on Cissus and how it works. This also pertains to how how the body is effected from long term use of the plant. It’s not that we are saying that this lack of evidence proves that the plant is dangerous, it’s that there is no real proof to say it is either good or bad.

It should also be noted that Cissus is primarily used to help with bone treatments and related issues such as arthritis. There may be some application towards weight loss with this plant, but that is not it’s number one use. It’s primary functions lie in another realm entirely.

There are also special warnings for people who plan on taking Cissus. The plant is known to lower blood sugar, so it’s not recommended for people with diabetes, as well as people who have recently undergone surgery. Women who are pregnant or breast feeding are also not recommended on taking this substance, as there haven’t been enough studies done to show how they will react to the plant.

While there are definite good qualities of this plant, the fact remains that there is not enough evidence done on it to show that it may help with weight loss. It may help, but that is not it’s primary use.

Having been used for centuries, Cissus is known for it’s uses in curing medical ailments such as bone fractures. Because it affects the metabolism and helps with digestive health, there may be some truth that this plant can help with weight loss. However there is a lack of scientific information as to how effective this plant really is in helping people lose weight. As it stands, results remain inconclusive.

There are other nutritional supplements available that have proven effectiveness. Just because this substance has been around for a long time, that doesn’t automatically mean it is proven as effective. It’s because of this that we recommend you look into other dietary supplements for your weight loss efforts.