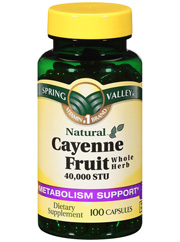 Cayenne Review – Is it Good for Weight Loss?

Ever feel like you need to add a little spice to your life? People look far and wide for things to help them lose weight, when in reality they don’t realize, that the thing that may be able to help them, was just in the spice rack after all. Cayenne is a spice, and you’re probably at least vaguely familiar with it already. Just think of the pepper that you put on your food, just hotter.

Word that’s been going around the weight loss world is that this spice can actually help you lose weight. Is that real? If it was true, then why even bother with diet pills, if all you had to do was take a deeper look into your kitchen cabinet to lose weight? So is weight loss as easy and simple as just sweating off a few pounds? Let’s find out.

Cayenne comes from a plant that is known to be cultivated in a warm climate. There is no such thing as a single company that makes cayenne, as just about anyone could cultivate it if they wanted to. Cayenne can be purchased either online from retailers such as Amazon.com, or in stores such as Walgreens. Cayenne may be taken by itself, or it may be added as an ingredient in a diet pill.

Cayenne is popular because it works as a thermogenic agent. Thermogenesis is the process of the body’s core temperature heating up. When you eat anything spicy and you start to sweat, essentially that process is thermogenesis. This process is known to boost the metabolic rate.

Despite being able to work as a thermogenic agent, that doesn’t necessarily mean that this has helped people lose weight before. Think of adding spice to your food. Sure, a hot pepper can make you sweat, but overall are you losing weight? If you really were losing weight, wouldn’t weight loss be easier to attain, and thereby wouldn’t there be no reason to even read this article?

The main active ingredient in cayenne is capsicum. Capsicum speeds up the metabolism and also suppresses the appetite. It is because of these qualities that this ingredient is popular for use in diet pills. Diet pills on the top 10 list commonly use substances such as this in their ingredient list. Capsicum is known to help various other ailments, such as toothaches, headaches and sinus infections. When applied topically, capsicum is known as a treatment for shingles. Cayenne has also been known to help people that have difficulty swallowing.

Side effects from taking cayenne may include stomach discomfort. This may happen soon after it is taken or later, even a day later. Other side effects may include skin irritation, itching and burning.

Cayenne  is all natural. For those of you out there who feel uncomfortable ingesting synthetic substances, this may be something that you would want to look into. Also it’s not hard at all to find cayenne, as it is widely available and can be found in any supermarket.

While cayenne is known to be an ingredient that is used in diet pills, what companies end up doing is adding other ingredients in with cayenne, which then may dilute the effectiveness of the ingredient.

The quality of cayenne may also differ from product to product. There are plenty of diet pills out there that use low quality cayenne because it’s cheaper to make as opposed to getting top grade ingredients.

While commonly added in diet pills, by itself cayenne is not the miracle ingredient that will have people losing weight in a matter of days. True it can help with weight loss, but results may be much less than you may expect.

Cayenne is a substance that can be widely found just about anywhere. However even though it’s widely available, that doesn’t mean that the quality of what you are getting may be the best. The effectiveness of this pepper is also questionable, as if it was really super effective, wouldn’t everyone who likes spicy foods be really thin? There are more effective substances out there that can actually have you losing weight. While cayenne may help a little bit in terms of weight loss, the fact of the matter is however that you can’t depend on it solely.

We recommend looking into other dietary supplements.