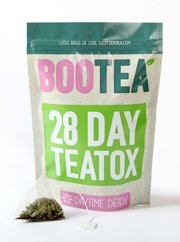 Bootea Teatox reviews: Is it safe?

What is Bootea Teatox?

While some weight loss tools currently on the market are designed to be taken for longer periods of time, Bootea Teatox promises to help users lose substantial amounts of weight in as little as two weeks. Comprised of two different types of tea, with stimulating and laxative effects respectively, Bootea Teatox promises to cleanse users’ bodies resulting in healthy and safe weight loss.

It’s hard to not be taken in by Bootea’s hip and flashy web presence, including their social media activity and cutting edge website. However, it’s no secret that short-term detoxes and cleanse programs are not exactly the healthiest, safest or even the most effective forms of weight loss. Is Bootea’s slick marketing just a front to cover up a less than effective product? Let’s take a closer look at Bootea Teatox and find out.

Bootea Teatox is produced by Bootea, a UK company that claims to sell health supplements that are 100% natural. Bootea claims to be dedicated to helping the users of their products begin and maintain a healthy lifestyle, advising against temporary diets  and short term fixes. They have an extensive social media presence, including Twitter and Instagram accounts, and provide users with freely downloadable eating plans to compliment their weight loss products.

Bootea Detox comes in the form of two components, a “Daytime Detox” tea to be consumed in the morning and a colon-cleansing “Bedtime Cleanse” tea to be consumed before bed. Bootea’s daytime tea should be taken every morning, but the bedtime tea is designed to be taken only once every two nights. Bootea comes in two varieties as well, offering either a 14 or 28 day detox plan.

Bootea’s Daytime Detox tea contains a blend of ingredients designed to allegedly suppress your appetite and boost your metabolism to help you lose weight throughout the day. It also seems to result in excessive urination, which will probably result in a loss of water weight in your body as well. The Bedtime Cleanse tea, on the other hand, is really nothing more than a laxative that seems unlikely to result in anything more than short-term temporary weight loss.

Despite some positive reviews provided by the company’s own official website, reviews of the Bootea Teatox that can be found online are almost unanimously negative, detailing the tea’s unpleasant taste, uncomfortable side effects, slow delivery of the product and lack of results.

The Bedtime Cleanse tea, on the other hand, contains no caffeine or stimulants. Instead, its blend of ingredients is designed to act as a laxative. These ingredients include Senna Leaves, Licorice Root, Fenugreek Seeds, Peppermint Leaves, Burdock Root, Valerian Root, Hawthorn Leaves and Psyllium Seeds. Users may be relieved to know that this nighttime tea does not contain caffeine, and ingredients such as Valerian Root are alleged to actually remedy insomnia and help you sleep.

Unfortunately, both teas can result in some nasty and troubling side effects. Users have been known to experience irregular bowel movements and abdominal pain, as well as both high and low blood pressure. Bootea Teatox has also been known to cause irregular menstrual cycles in women, and even interact with birth control and contraceptive pills to make them ineffective.

The official Bootea website provides users with freely downloadable eating plans to compliment their use of Bootea Teatox.

Short-term detox plans such as the one offered by Bootea are generally considered to be ineffective for long-term, permanent weight loss. Users reviews online are almost unanimously negative, complaining about almost every aspect of the product, from the taste to its lack of results. Users of Bootea Teatox also run the risk of encountering a variety of unpleasant side effects, and the product can even interfere with women’s menstrual cycles and birth contraceptive medications.

Bootea Teatox offers users either a two or four week detox plan to be achieved by consuming two different types of tea, one in the morning and one at night. These teas are designed to act as an appetite suppressing and metabolism boosting stimulant, as well as a laxative to cleanse your system. This is accomplished by the teas’ blend of natural ingredients, but some uncomfortable and troubling side effects may occur from the use of Bootea Teatox.

Users of weight loss supplements should always be wary of products that promise results as quickly as Bootea Teatox does, but there are a variety of other reasons to stay away from this product as well. Considering the apparent inconvenience of obtaining the product, as well as the unpleasant side effects and user-reported lack of results, Bootea Teatox doesn’t seem like a very reliable or efficient weight loss product.