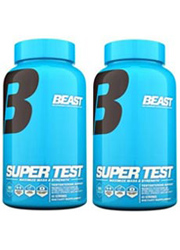 Beast Sports Nutrition Super Test is an athletic performance and male enhancement supplement that is specifically designed to help increase the testosterone levels of its users. They say that it can help men add muscle, support their sex drive, and help to detoxify their bodies.

Their advertising says that it can help men build up their muscle mass and density, which in turn lead to greater strength and improve workout effectiveness and efficiency.

Beast Sports Nutrition Super Test recommends their product to athletes looking for an edge, older men that are looking to regain their virility, and any man that wants to improve their sexual satisfaction, as well as that of their partners.

Beast Sports Nutrition Super Test is one of the products of Beast Sports, a nutrition and supplementation company that is specifically oriented toward products that boost athletic performance and help speed recovery. Beast sports has been involved in some controversy recently regarding the protein content of some of their exercise products.

Beast Sports and a handful of other major athletic supplements manufacturers have recently been the target of a class action suit that alleges that they engaged in “protein spiking;” a practice that involves using ingredients that make their products test as though they have higher levels of protein in them than they actually do. This probably does not affect Beast Sports Nutrition Super Test, however it does give some insights into their values as a company.

The reviews of the organization itself from clients and former employees also reveals a level of dysfunction that is disturbing. Former employees tell stories on sites like Glassdoor about how Beast Sports is more oriented toward turning a profit than being honest with their consumer base.

There is another class action lawsuit that alleges that they have unethically engaged in practices that allow them to undercut their competition online. They have also been accused of posting fake reviews for their products online, with the review engine Fakespot finding that as much as 20% of their reviews are faked.

If this is the case, then the ratings for Beast Sports Nutrition Super Test with their past users is very bad. They only have a 3.5-star rating on Amazon as it is; if some of those reviews are faked then that score is even less impressive.

Follow this link to find male enhancement products that will be beneficial for helping you overcome your specific sexual issues.

Beast Sports Nutrition Super Test uses multiple different forms of testosterone boosters and aids in order to create their proprietary blend. They have chemicals that are not only thought to increase the raw production levels of testosterone in the body, but also to make the brain more receptive to that testosterone.

The effects of testosterone on the body are far reaching. It helps with energy levels, fat processing, and, as mentioned, is a key to building muscle tissues as well. It is also a major factor in libido and erectile health, with testosterone playing a significant role in the arousal process from start to finish.

Testosterone boosting is one of the most traditionally effective ways to improve both athletic ability and sexual performance. Assuming that their claims about their products effects on T levels are accurate, then it will probably be at least somewhat effective for the purposes that it is advertised for.

Beast Sports Nutrition Super Test has a very long ingredients list. Some of the contents in their blend are thought to be incredibly effective for helping the body’s testosterone cycles, whereas others have not shown to be as useful as their manufacturers make them out to be.

Puncture Vine Extract: Derivatives taken from a fruit that is inedible in its natural state but that can have a number of benefits for human’s testosterone processing. Puncture vine, also known as tribulus terrestris, helps increase the sensitivity of the androgen receptors in the brain, helping the body respond more efficiently.

Rhodiola Rosea Extract: An adaptogenic herb that is used far more frequently in nootropic supplements than it is in male enhancement products. Rhodiola has shown some benefits for fighting fatigue and increasing energy levels, however it has never shown any sort of use for testosterone production.

Fenugreek Extract: A sweet-tasting leafy green vegetable that is thought by some to increase testosterone production, despite all data to the contrary. Most objective studies into fenugreek, as well as into the fenugreek extract testofen, have shown that it does not have any significant benefit to testosterone levels.

L-Arginine: A potent circulatory aid that also has some benefits for testosterone production. L-Arginine is an amino acid that helps to release the stored human growth hormone in the body, which is a precursor to testosterone in the androgen cycle.

Milk Thistle Extract: A flowering plant whose stem contains a viscous white substance that many call its “milk.” While this “milk” may have some nutritional value, particularly for helping in the fight against diabetes, it is not thought to have any impact on testosterone function, sexual performance, or any other aspect of male enhancement.

FD&C Red #40, Blue #1: These are two artificial food colorings that have no medical, therapeutic, or wellness value. There has been some controversy surrounding them recently as they have been shown to raise the chances of contracting cancer and may cause changes to users’ DNA when taken regularly.

Click here to find out which male enhancement products our experts recommend for men that are looking to improve the intensity of their orgasms and the volume of their output.

Beast Sports Nutrition Super Test does utilize some very effective ingredients in their proprietary blend. L-Arginine and puncture vine extract in particular are thought to be particularly useful for male enhancement products and are considered to be even more potent when they are taken together.

Unfortunately, in addition to all of the useful ingredients in Beast Sports Nutrition Super Test they also choose to use a number of useless ingredients that only serve to make the blend more expensive, as well as some other additives that are not only useless but also dangerous.

Our team does not recommend any health or wellness product that uses artificial food dyes, especially Red #40 and Blue #1. Nutritional supplements like Beast Sports Nutrition Super Test are formulated to be taken multiple tikes every day.

It is extremely irresponsible to include dangerous additives like this knowing how regularly people will be consuming them. Our team does not recommend any product that uses unnecessary and dangerous coloring agents.

Beast Sports has some issues as a company as well that make our team nervous about trusting their products. There is evidence that they have falsified their positive reviews, they have very poor scores with review agencies, and the information about their CEOs that is publically available is also somewhat disturbing.

To learn how to maximize your sexual performance potential, just click on this link.

Beast Sports Nutrition Super Test is a male enhancement product that promises its users that it can increase their testosterone levels and processing abilities. Unfortunately, it uses an ingredients blend that does not seem to be well suited to this task.

Aside from a few ingredients that our team does approve of, the majority of their contents are fad ingredients that lack any sort of convincing clinical data that says they can actually be effective. Their blend also uses several artificial food dyes that have no positive value nutritionally but have been shown to be potentially damaging to users in the long term.

Follow this link to see our experts’ top ten list of the most effective male enhancement supplements on the market today.

Beyond that, they were also not impressed with Beast Sports Nutrition Super Test mediocre ingredients blend, their dishonesty in their advertising, or the reports of disturbing behavior from their CEOs that can be found coming from ex-employees of the company. For all of these reasons, our team of health and wellness experts encourage our readers to find a different male enhancement product to meet their needs.

The single product that our team recommends the highest is called Viritenz. It has shown in our analysis that it can help to restore lost testosterone function in older men while also helping younger guys to reach new heights of performance.

It has been shown to help improve erectile functionality, libido levels, sperm quality, sexual stamina, and a number of other key factors for sexual health. Click here to find out if Viritenz could be an effective product for your specific needs.