Reviews > Weight loss pills > Albuterex – Side Effects. Is it safe for you? Advertising Disclosure 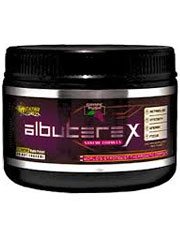 Albuterex – Side Effects. Is it safe for you?

Promising to let it’s users burn fat like never before, Albuterex tempts it’s users into making a purchase of it with promises of lean, sexy results. However there are several countries that have banned this product altogether.

Does this product work like it says it does? Or is there something potentially dangerous about it that we should stay away from? We decided to find out.

Albuterex is manufactured by a company known as Mutated Nation. Not much is known about the company, as it has no official website. Albuterex has been discontinued, but can still be found on Ebay.com

Albuterex works as a thermogenic agent, heating up the body’s core temperature so as to increase metabolism. The product claims that it helps target more than way to help lose body fat, unlike other products that only use one, which eventually lead to homeostasis. Not much more is mentioned past this. To use this one scoop is consumed before breakfast and again before lunch, but not before bed.

People who have used this product have reported generally negative results, with some users needing to go to the hospital for medical attention.

If you are interested in diet pills that don’t hide their all natural ingredients, please check out the top 10 list.

Albuterex can definitely give it’s users a boost of energy, however people who are sensitive to stimulants may not want to use this product.

Albuterex has been banned in other countries such as Canada and Australia, with places like Hong Kong also advising their citizens to stay away from this product because of the potential side effects. The stimulant ingredients included in this product may be dangerous for people to take, and government officials have taken note.

What makes it potentially dangerous is not only what is included in the product, but the other ingredients that aren’t mentioned that make the stimulant properties more potent. Why the company would hide this is hard to say. But being that the company itself, Mutated Nation, gives no real information about itself away, this common trend shouldn’t be surprising.

In the end this company seems to have a lot to hide, which is never a good sign.

Knowing that some foreign countries have banned this product is reason enough to stay away. Why take a risk taking this product when it could be potentially dangerous to use? And all this coming from an unknown company nonetheless?

The biggest warning sign about this product, is that there are foreign countries that have banned this product, if they are not highly suspicious of it already. Having already been discontinued, that’s enough reason to stay away from this product, and that’s not even considering the potential negative side effects. There are other diet pills out there that are more effective, even cheaper. If Albuterex gives you anything, it should be the lesson of what to stay away from when looking for a diet pill.

We recommend looking into other diet pills that may be better and more effective for you.