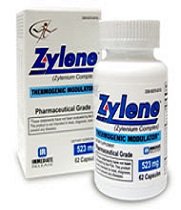 Zylene – Does it Really Work?

Zylene is a dietary supplement that takes a multi-faceted approach to weight loss, containing ingredients that are intended to both suppress your appetite and improve the way your body and metabolism burn fat. While some of these ingredients are actually widely believed to be effective, we found a lot of concerning information about Zylene and the people who make it that may make you think twice before you try this product. Read on to discover our problems with Zylene.

We looked into Zylene’s production history and were extremely concerned about how difficult it is to find any kind of official information regarding this product. In fact, it looks like all traces of official information about both Zylene and its creators have vanished from the internet. While reviews of Zylene claim that the product was created and sold by a supplement company named Health4Wealth, the online domain of the company’s official website has expired and the website is gone. What does remain is a number of complaints about Health4Wealth about many of the company’s shadier policies such as automatic billing. These complaints probably contributed to why Health4Wealth no longer seems to be in business.

How (and) does Zylene work?

Zylene’s formula is comprised primarily of ingredients intended to suppress your appetite. For example, Zylene contains Hoodia Gordonii, one of the most commonly accepted appetite suppressants on the market. In addition to this ingredient, Zylene’s formula also contains Garcinia Cambogia, which is a safe alternative to a powerful but illegal appetite suppressant Ephedra that the Food and Drug Administration no longer approves of.

Zylene also contains ingredients that are allegedly capable of improving the way your metabolism functions and how your body burns fat. Green Tea is one of the most popular metabolism boosters in the weight loss community, so we weren’t surprised to find it in Zylene’s formula, alongside other popular fat burners like Gymnema Sylvestre and Cassia Seed.

We looked around for reviews of Zylene written by people who have actually used the product. Many of the reviews found on sites such as Amazon are actually pretty positive. However, there were a few concerning reviews that you may want to pay attention to. Some users have not experienced weight loss at all, and others feel like the product gradually stops working over time. Many people who have used the product also had trouble obtaining a legitimate version of the product. Sure enough, the product is no longer available on Amazon, or from anything resembling an official source.

Zylene containts the following ingredients, many of which can commonly be found in other popular diet supplements.

According to complaints about Zylene’s parent company, the supplement is reportedly capable of causing blood to appear in your urine, as well as erectile dysfunction. Apparently, these side effects are caused by unnatural fillers and dyes that the product fails to advertise.

Several of the ingredients found in Zylene are commonly accepted by the weight loss community to actually be effective.

There is no longer any official source from which to buy Zylene, which means you’ll have to deal with third-party distributors who may be untrustworthy and trying to rip you off. Some users who have left reviews of the product on Amazon are concerned that pills they’ve received are just ineffective knock-offs.

Zylene is a weight loss supplement that is reportedly capable of suppressing your appetite and improve your body’s thermogenic and metabolic functions to improve the way you burn fat. Unfortunately, there is a lot of controversy surrounding Health4Wealth, the creators of Zylene who no longer seem to be in business.

Even if Zylene contains some ingredients, the controversy surrounding this product and its creators is simply too significant for us to recommend it. You’ll have better luck with a supplement that you can buy from an official and trusted source than risking getting ripped off by buying Zylene from a shady third-party distributer.