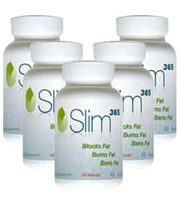 Claiming that 60% of the United States is classified as obese, Slim 365 puts the pressure on anyone who is reading their website, making them less certain about how good their own weight is. But never to worry, Slim 365 is here to not only help people lose weight, but keep it off as well. And it’s not a temporary fix, as this product claims that you can be healthier and slimmer all year long!

Well to the crowd of observers that may have found out that they are not in as good shape as they thought before reading the company’s website, this must be a welcome relief. So does Slim 365 really work as advertised? Or are their claims completely overblown? We decided to look into this product and find out.

Slim 365 is said to be created by a Dr. Seymour Weaver (Also mentioned as Dr. W). Dr. W is claimed to be a physician based out of Houston, Texas. Passed this however, there is no real information on the company that manufacturers Slim 365. Slim 365 can only be bought through it’s own official website.

Slim 365 claims that it can suppress appetite, reducing belly fat and giving you more energy. It should be noted that the official website does a little word play, as some of the points are really the same thing. An example of this is that it lists that Slim 365 can help you “Avoid cravings” “Eliminate impulse foods” and “Reduce overeating”. Are these not all essentially the same thing? Another example of this is that it states that it can help “Improve digestion” and “Rid your body of buildup of undigested substances”. The company just likes to put smiley faces next to the bullet points to keep people in a positive bubble.

Not only does the official website lack any testimonials, but there are no independent reviews to verify any of the claims that Slim 365 makes of itself.

The contents of Slim 365 are packed with various ingredients, some of which help suppress appetite, others being diuretics or helping with the digestive process. There is also the inclusion of vitamins which are used to maintain overall health. While this all may sound good, there are no clinical studies provided to prove that the product as a whole is actually effective in helping people lose weight. This is unlike diet pills on the top 10 list, which are all clinically proven to be effective.

The company’s website claims that this product causes no side effects, although there are no independent reviews available to verify this claim.

Slim 365 includes within it green tea extract, which is known to be effective in helping people lose weight.

Despite it’s claims, there is simply no clinical evidence to show that this product is effective in helping people lose weight at all. Not only are there no studies provided, but there are no testimonials or independent reviews as well. You really have nothing else to go on but the manufacturer’s words as validation.

The website itself doesn’t help to make Slim 365 seem very valid either. It’s filled with free add ons, which include books and a coaching session, all of which is supposed to be at a higher dollar value than you are getting. This is a tactic used by unsuccessful scam products.

Slim 365 also contains within it a few ingredients that are diuretics. While commonly used in diet pills, diuretics can lead to dehydration and water retention, so it is best to be a bit wary of them when they are used.

Sure losing weight and keeping the pounds off is a great sounding goal that people would like to aspire to. Too bad there isn’t any evidence that this product can help people attain this.

Despite all the optimism in it’s claims, there is simply no proof that this product is effective in helping people lose weight. There are no testimonials nor independent reviews of this product, nor are there any clinical studies provided at all. Better diet pills include all these things. As it stands Slim 365 is but a mere image, an idea of weight loss, but not the real thing.