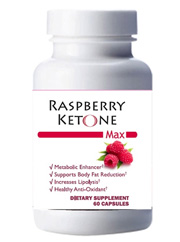 What is Raspberry Ketone Max?

With a website featuring various attractive, smiling women who look the viewer in the eye, Raspberry Ketone Max claims that it can have it’s users not only losing weight, but boosting metabolism and energy levels as well as increasing fat oxidation. Raspberry Ketone Max is even claimed to be recommended by doctors, so it must be good then right?

At least that’s what the company making this product wants you to think. What they want you to do is buy their product, first and foremost. So are the claims of effectiveness founded in reality or is this all just a lot of optimism leading to nothing? We decided to find out.

Raspberry Ketone Max is manufactured by a company based in Larnaca, Cyprus known as Santrinico Enterprises. Santrinico Enterprises is known for producing various other health and wellness products, but there have been a number of complaints about this company. Some of these complaints include problems with an auto-shipment program. Raspberry Ketone Max can be purchased on it’s own official website, as well as third party retailers such as Amazon.com.

The company’s website makes mention that it is raspberry ketones that have been isolated from the fruit they come from and put in a supplement to help people lose weight. The company’s website says that there are 500mg of raspberry ketones, but we checked the labeling we saw that it was only 300mg (the label on the official website is available, however the text is small and hard to decipher). It is this ingredient that is claimed will boost metabolism. They then go on to say that doctors recommend people use natural products to lose weight, but there is no further explanation as to how this product works. There is also no mention as to how any of the other ingredients help with weight loss.

There have been many negative reviews on this product, with claims that no weight loss was seen at all. One user on Amazon.com even reported weight gain!

Even though raspberry ketones are highlighted in this product, they are not the only ingredient included. Some of the ingredients such as green tea are known to be effective in helping with weight loss. Other ingredients however such as chromium are known to be ineffective. This is unlike diet pills on the top 10 list, which include only ingredients that are proven to be effective. It should also be noted that there is a high amount of caffeine included in this product as well, so people who are sensitive to stimulates should take heed.

There is a high amount of caffeine contained in this product. Adverse effects from this may include upset stomach, nervousness, jitteriness, increased heart rate nausea and restlessness.

Despite the maker’s claim raspberry ketones are effective in helping people lose weight, the fact of the matter is that there is no scientific evidence available that proves this. Studies have shown that when injected into animals weight loss was seen, but in humans the results were minimal at best. Chromium, which is also included in this product, is also known to be ineffective in terms of weight loss. Also there are high levels of caffeine in this product that may not be good for people who are sensitive to stimulants.

The official website pulls some clever tricks in their wording, making it seem like this diet pill actually can do more than it actually does. An example of this marketing tactic can be found in the bullet points at the top of the official website. One bullet point reads “Helps fight fatigue” and the one immediately under it says “Helps increase energy”. Now if you think about it, aren’t these two points really the same thing? Other bullet points that talk about fat oxidation in one and metabolism in another are also pretty similar.

Lastly despite claiming to be recommended by doctors, there is not one study provided to back up these claims. It is stated that doctors recommend “natural solutions for weight loss” but there is no mention of them recommending Raspberry Ketone Max at all.

This product is just not effective in helping people lose weight. If there is any loss to be felt anywhere, it’s going to be in your wallet.

With several 1 star reviews on Amazon.com, it’s pretty fair to say that this is not the weight loss product that you have been looking for. Raspberry ketones are known to be ineffective in helping people lose weight. The high amount of caffeine included within this product may also turn potential users of this product away as well. Superior diet pills are a far cry from this, and are readily available as well. We have nothing else to say about this product, other than that you should stay away from it.