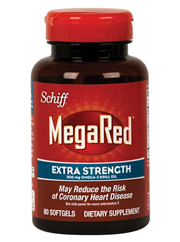 What is Mega Red Krill Oil?

This one a day krill oil pill sourced from Antarctica’s waters contains omega 3 and omega 6 in sparing amounts. There’s claims it can reduce the risk of coronary heart disease and provide positive all around effects.

A notice by the makers state that there is no fishy aftertaste and that fish burps aren’t an issue.They proclaim that within 30 days that omega 3’s will be greatly increased within the body.

Just how useful is this product? Let’s take a step further and examine the results.

Schiff Nutrition International, Inc are based in Utah and they are now owned by a bigger company named Reckitt Benckiser. They were fined 10.2 million pounds in the UK for their admitted role of anti competitive practices. Accusations ran after they delayed the release of a cheaper generic drug similar to their formula.  This prevented several people in need of a cheaper drug the access to proper health care.

After daily use for 30 days the makers mention triglycerides will be reduced which can lead to stroke and heart failure.  A C-reactive protein that leads to inflammation is also reduced by the omega 3’s found in this product.

Astaxanthin is present in krill but not fish oil, this works an antioxidant and antiinflammatory. Also included as phospholipids which makes it easier to absorb.

While this product contains omegas which are good, there are only 90 mg in the recommended dose. Current studies mention people need at least 500 mg a day. This bottle’s formula would require just over 5 pills to reach that important mark.  Since the makers mention only one is needed its unclear if potential side effects may arise.

While there are all natural ingredients this product contains a common allergen in shellfish. Also their product is really low in its key ingredient. For a supplement that’s worth your money and free of a common allergen we recommend other solutions.

Found in many stores and they offer 5 different blends.

One of the biggest faults is the lack of actual Omegas in this product. Only a small 50 mg dose of EPA and 24 mg of DHA are inside. This makes a total lack of strength as at least 500 mg a day are needed of each according to dieticians.

Since the product is meant to be a one a day there is no way to tell if taking an excess to reach the daily requirement may lead to side effects.

In comparison to other options such as natural foods this product does not provide its weight in money. The such small amounts of Omega’s can be easily found thru supplementation with foods. Also a important thing to remember is that Krill is considered a common allergen and it can cause reactions in some.

Currently online 92 customers on Amazon.com have reported that this product has a bad lingering fish smell which goes agaisnt what the makers promise. There is also the issue of it spoiling, typically a krill oil capsule has a short shelf life and purchasing bad oils can be bad for your health.

Mega Red Krill Oil has a large distribution and it is the number one krill oil brand, but it falls short in terms of use. The product contains a common allergen that has a very weak dose of its active ingredient.

The amount of heart healthy omegas can be easily substituted with food. Also the fear of many krill oils being toxic has still not been studied by the FDA. Currently there have been several independent lab tests that have shown a risk of toxicity. Couple this with the fact the product has shown to smell bad to many customers leaves an opportunity for risk.

Though this product is currently number one in its category, there’s too many important questions that need to be answered. For example the many studies that show potential toxic levels in krill has yet to be addressed. Currently supplements that have not shown potential risk of toxin intake are made available to you.

When taking an all natural supplement you also have to account for the strength of a product in relation to its price. Supplementing your body thru all natural means is made right when you get the proper dosage necessary for your optical desires.