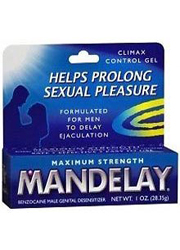 Mandelay Review: Is It Safe?

Mandelay is a male genital desensitizing cream that is used to prevent premature ejaculation and prolong the duration of sexual intercourse. It is applied directly to the penis several minutes before intercourse is to begin where it deadens the nerves, allowing men to have sex normally and reach climax later than they would otherwise.

It is safe for use with condoms and is generally well tolerated if used correctly. After several minutes sensation returns to the penis as normal, with no lasting effects on the user’s future ability to feel pleasure.

The most effective male enhancement product for improving overall sexual performance is Viritenz.

It is an erectile aid and libido booster that has also been shown to help improve sexual stamina, orgasm control, and orgasm intensity. Click here to read more about the ways that Viritenz can increase sexual satisfaction for both the user and their partner.

Mandelay is the product of the Majestic Drug Co. out of South Fallsburg, New York. They are a mid-level health and pharmaceuticals products manufacturer that mostly specializes in dental care products.

They have been in business since 1950 and have not had any significant legal issues or run-ins with the FDA or other governing bodies. They have mediocre ratings with most online consumer advocacy groups, such as Trustwerty, who only rated the 3/5 stars.

Mandelay is widely available in stores across the United States and worldwide through a number of different web-based retailers. They are carried in both the physical and online stores from Walmart, Walgreens, GNC, and many others.

Majestic’s products have a 3.5-star overall average score on Amazon, with Mandelay scoring slightly worse at just under 3/5. It tends to be relatively affordable, retailing for between $6 and $9 for a 1 oz. tube.

For a list of the top ten most effective male enhancement products on the market today, click on this link.

Users apply a small amount of Mandelay directly to the skin of the penis, especially the head, where it is most sensitive, approximately 2-3 minutes before sex is going to begin. This blocks the nerve signals that communicate pleasure from traveling to the brain, which can help stop some men from ejaculating too rapidly.

Users should note that Mandelay is not an erectile aid or libido enhancer in any way. It does not improve circulation levels, testosterone production, or help men perform sexually in any capacity other than by deadening feeling in the penis so that the user is less likely to experience orgasm before they and they partner have had a satisfying sexual experience.

Desensitizing creams have been used by humans for this purpose for thousands of years, to varying degrees of success. While some men have found them useful, others have complained that they take too much of the pleasure away from sex, making it no longer enjoyable overall.

Others are frustrated with the fact that a numb penis leaves them unable to perform effectively and respond to their partners’ bodies and movements. It is a frequent occurrence that men who use Mandelay and other deadening creams have difficulty maintaining effective erections due to the lack of stimulation.

To learn about the best ways to maximize your erectile responsiveness and performance, follow this link.

Mandelay is a very simple formula that has only one main active ingredient and some basic filer ingredients to help with absorption. It also seems to be a scented product, however they do not have any scent-based ingredients on their ingredients panel.

Benzocaine: One of the most commonly used topical anesthetics in the world. Benzocaine is found in quite a few different types of over the counter pain and irritation relievers including sore throat lozenges like Cepacol, tooth and mouth pain relievers like Orajel, and insect and bug bite sprays and serums like Skeeter Stik.

It was first synthesized in Germany in 1890 and spread into common medical use in the early 1900’s. It can be prepared as a paste, cream, gel, or serum, as well as being used in ingestible lozenges and inhalable aerosol sprays.

Benzocaine works by inhibiting VDSC’s (voltage-dependent sodium channels), the neural pathways that carry sensory signals to the brain. Areas that benzocaine comes in contact with are unable to communicate with the brain, and as such the user is unable to sense what is happening to the affected area.

Using Benzocaine to treat premature ejaculation is one of the less frequent applications of the drug, however people began using it for those purposes not long after it came into widespread use.

Aside from some mild allergy issues, benzocaine is mostly harmless when used correctly. There are, however, some significant health issues that can occur if benzocaine is used improperly.

Benzocaine, if absorbed into the bloodstream, can potentially cause some very serious health issues including:

This means that if a man applies Mandelay to his penis before sex and does not clean it off, he runs the risk of putting his partner’s health in serious danger. For this reason, the use of condoms in combination with the gel is preferred in order to ensure safety.

This issue is further complicated by the fact that its effects only tend to last for 10-15 minutes, which means that re-application may be necessary mid-intercourse, which may be frustrating and disruptive for some users and their partners. For these reasons and others, topical benzocaine creams are not our team of expert’s preferred method of orgasm control.

Click here to learn why some male enhancement brands have outperformed others in our experts’ analyses.

Benzocaine creams are well tolerated by most men if used properly. While it is not our experts’ most recommended method of improving orgasm control, some men have found it useful for helping them deal with their premature ejaculation.

Mandelay does not provide any form of male enhancement other than possibly helping them prevent premature ejaculation. Even many men that suffer from PE will not find Mandelay to be helpful, however, as it cannot help address chemical or psychological issues that may be the underlying cause of the problem.

Benzocaine is also possibly dangerous if used improperly, and the conditions that Mandelay is used in make the potential for accidents a cause for concern. If it should enter the blood stream of the user or their partner, the consequences could be as serious as heart attack, stroke, and death.

The most common issue that gets brought up by former users of the product, however, tends to be that sex is less enjoyable when they cannot feel it. Often times Mandelay led to issues with erectile dysfunction due to lack of sexual stimulation.

Follow this link to enter the most comprehensive library of reviews for male enhancement products found anywhere online.

Mandelay is a cream that users can apply to their erections directly before sex that may help them prolong their orgasm and increase their sexual stamina. It is not a male enhancement products and has no applications for performance in any other capacity.

It has some health and safety issues, and there are also some concerns that it could lead to difficulty maintaining erection for some users. While some men may find it to be helpful, topical numbing creams are not recommended by our experts as a method of improving sexual performance.

Mandelay is a very basic topical anesthetic that may have some applications for improving premature ejaculation issue. It may also be a potentially dangerous product that can cause erectile dysfunction or at least take away some of the pleasure of the sex act. Our team suggests that our readers try alternative methods of addressing their PE issues before resorting to using Mandelay.

The most effective method of improving orgasm quality is through testosterone support supplements like Viritenz. Testosterone helps users avoid premature ejaculation and improve their control over when it does occur.

It can also increase erection quality, libido levels, and sexual satisfaction for both partners. Click here to find out if Viritenz can be helpful for your sexual performance issues.