Reviews > Weight loss pills > Lipoblast Review – Side Effects. Is it safe for you? Advertising Disclosure 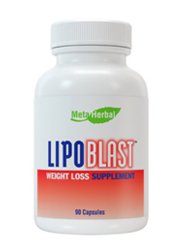 Lipoblast Review – Side Effects. Is it safe for you?

Many products on the weight loss market make boisterous claims, but it’s still head-turning whenever you say a diet pill refer to itself as “miraculous. Lipoblast is one of those products. Originally created and produced in Brazil, Lipoblast was initially designed as a mood altering substance designed to provide a “legal high”. However, after its manufacturers realized that the product could be applied to weight loss, Lipoblast was rebranded as a diet pill.

Honestly, this all sounds kind of shady from the start. We haven’t even examined this product’s ingredients, or how it’s intended to work, but the fact that Lipoblast was initially intended to provide a “legal high” already throws up some pretty big red flags. Still, let’s take a closer look at Lipoblast and see if its ingredients or effects are enough to redeem its questionable origin.

The official Lipoblast website provides a link to the website of Meta Herbal, which seems to be the product’s parent company. Unfortunately, MetaHerbal’s website offers virtually no information about the company, but they do provide an email form and phone number as forms of contact information. Further research into the company reveals that MetaHerbal Laboratories has operated since 1987, and that the company also markets such other charming products as a natural penis enhancer known as ProMagnum-XL. Not that there’s anything wrong with that.

Lipoblast’s official website claims that the product is capable of suppressing your appetite and boosting your metabolism to help you burn fat – claims made by almost every weight loss product currently on the market. Sure enough, Lipoblast contains many of the same ingredients found in other products allegedly capable of similar similar results.

Reviews of Lipoblast that can be found online are largely negative, written by users who have been disappointed by the product’s lack of weight loss results or bothered by Lipoblast’s various side effects.

It may be surprising considering the fact that Lipoblast is supposed to be a dieting aid, but the majority of the product’s ingredients actually have nothing to do with weight loss. The few ingredients that do allegedly have weight loss properties include Epigallocatechin Gallate, Hordenine, and Yerba Mate, as well as several ingredients alleged to have more minor effects on weight loss such as ginger root, cocoa, grape seeds, pantothenic acid, magnesium, pyridoxine HCL and ascorbic acid.

Use of Lipoblast has been known to result in a variety of side effects and the product is not recommended for anyone with an underlying health condition. Lipoblast contains Phenylethylamine, which is considered a possible cause of hypertension and strokes, and clinical tests of the effects of N-Methylaminoethanol on pregnant rats and their pups resulted in most of the newborns dying within 36 hours of their birth. Do you really feel safe ingesting an ingredient capable of something like that?

Use of Lipoblast has also been reported to result in headaches, dizziness, nausea and bloating.

While marketed as a weight loss aid, the majority of the mood-affecting ingredients still included in Lipoblast’s formula seem to have more to do with its shady origins as a product intended to produce a “natural high”. Some of these ingredients are even dangerous, having been previously linked to strokes in humans and deaths in animal test subjects. Users have reported disappointing weight loss results and unpleasant side effects such as dizziness and headaches.

Originally manufactured as a legal mood altering substance designed to produce a “legal high”, Lipoblast was rebranded as a weight loss aid designed to suppress your appetite and boost your metabolism. However, the product’s formula still seems to put this altered mood before weight loss, and some of its ingredients have been linked to dangerous repercussions. Users have reported almost nothing but disappointing weight loss results and unpleasant side effects.

Lipoblast barely seems safe, let alone effective. Considering the fact that many of the weight loss ingredients present in Lipoblast can also be found in a variety of other dieting aids, you’d be best advised to skip this controversial and possibly dangerous product in favor of something more reliable, trustworthy and most importantly, safe.