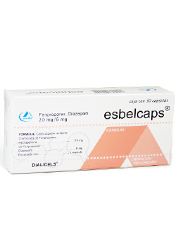 Fenproporex Review: Is it safe?

Even though in contemporary times the media likes to make a big deal about the obesity epidemic, the fight back to reclaim our slimmer healthier selves was started much earlier than people may popularly think. Having only been officially reported to being manufactured in 1986, fenproporex was made in an effort to help stop it’s users shed a few pounds. Not available in America, fenproporex comes to it’s mainly international consumers, and those in this country that know about it from the internet.

But did I just say it’s not even available in the United States? What is this product with eleven letters exactly? Some chemical in the guise of a cure? Or is it a potentially dangerous narcotic? Is it even safe? We went ahead to find out.

Fenproporex has been manufactured in countries such as Germany, Switzerland, France and Brazil. Fenproporex is not available in the United States, but it can be bought over the internet and is popularly done so from countries in central and south America. The safety of purchasing online however is questionable. Fenproporex can only be obtained with a doctor’s prescription.

Being a derivative of amphetamine, fenproporex works in a similar way. Effecting the central nervous system, fenproporex is used as an appetite suppressant, also known as an anorectic. Amphetamine based chemicals also have a tendency to effect the focus and attention of the user. Over time this can effect the dopamine receptors in the brain. This is where one needs to be careful, as there is concern for chemical addiction setting in, as with any amphetamine based products.

Despite suppressing appetite, it is mentioned that without diet and exercise, fenproporex may not be all that effective.

Fenproporex is a stimulant that is a derivative of an amphetamine. It is made up of 3-(1-phenylpropan-2-ylamino). Knowing what it’s chemically similar to amphetamine alone can make people uncomfortable and even though unavailable in the United States, it is listed as a schedule IV controlled substance.

If after reading this you don’t find yourself interested in products such as this, but instead diet pills with all natural ingredients, please check out the top 10 list.

The only way to obtain fenproporex is with a doctor’s prescription. At least you know you have an appetite suppressor of a higher caliber.

First and foremost it needs to be mentioned that fenproporex was never approved by the FDA. This is different than other diet pills, where there is a disclaimer about how the FDA hasn’t evaluated the statements made by a product and so on. Fenproporex actually wasn’t approved.

Fenproporex was banned in the United States for it’s potential for abuse, as well as the possible negative side effects that it may cause. While available internationally, several other countries have banned the drug in regards to sporting events.

Overall there’s nothing very certain about this drug, and other than what’s been previously mentioned, there’s not much more information on fenproporex. Diet pills are used to make people into a healthier version of themselves. But if there isn’t much information on the product available, who is to say if it really works, or is actually safe to use for that matter? If you want to get healthier it’s important to know exactly what it is that you are putting into your body. With this however it’s like taking a shot in the dark and expecting to make a bull’s eye. But with taking this shot, there’s potential to harm your physical well being.

Without much information, and not being available in this country anyway, the cons outweigh the positive benefits of using this product. If even the FDA warns against use of the product, this writer thinks that it pretty much speaks for itself about the effectiveness and safety of this product.

The lack of information and the FDA forewarning are enough to make anyone considering this product to think twice. There’s just not enough data out there to prove that this product is safe for human consumption. Plus, it’s not like you can even get fenproporex in this country. Why waste time with something that’s possibly dangerous and not even available anyway? There are other diet pills out there that are much safer, cheaper and more effective. Losing weight is self improvement. To get there you should use only the best products on the market. You shouldn’t have to go through a back alley drug deal to get there.

We strongly recommend you try other diet pills that are safer and better for you.