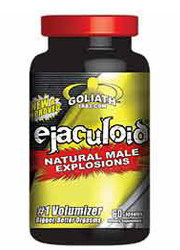 Ejaculoid Review: Is It Safe?

Ejaculoid is a male enhancement supplement that is designed to help men improve both their athletic performance and their sexual responsiveness. Their advertising claims that it can improve both users’ testosterone functions and their circulation, both of which can have benefits for their ability to achieve and maintain erection.

They say that it can help improve the efficiency of users’ workouts, helping them burn fat and build muscle more rapidly. Their label also claims that Ejaculoid is a “volume enhancer,” helping men increase the overall quantity of ejaculate produced during orgasm.

The manufacturer of Ejaculoid listed on their label is Goliath Labs, who are themselves a subsidiary of Nutraloid Labs, Inc., a Kingston, New York-based vitamins and supplements company. They have only been in business for six years, however in that time they have already had numerous interactions with the FDA and other regulatory agencies.

In 2023 there was a massive recall initiated for several different Goliath Labs products, including Ejaculoid. An inspection of their facility by FDA agents showed that they were using potentially hazardous unlisted chemicals in their products including sulfoaildenafil, a cheaper, more dangerous version of sildenafil, the main ingredient in Viagra.

Due to this recall, Ejaculoid is no longer sold in any retail locations. It is now solely available through online outlets, who tend to sell it for somewhere in the range of $31-$54, depending on the distributor.

Click here to see how to maximize your erectile size and functionality through male enhancement supplementation.

Ejaculoid’s main product claim is that they enhance the volume of seminal fluid that is produced during orgasm. The way that they accomplish this is by attempting to increase the testosterone function of the user, which can impact men’s sexual performance in a number of ways.

Testosterone is largely responsible for powering the male sexual response system, from initiation to completion. It helps increase libido and sexual thoughts, erectile strength and refractory period, and it also has a number of effects on men’s orgasms.

It tends to make climaxes more intense and pleasurable to the man, however it is also can help them avoid premature ejaculation. When they do reach orgasm, men with higher testosterone produce not only a greater volume of seminal fluid, but it is higher in sperm density, and the individual sperm are more motile and longer-lived.

Ejaculoid lists a very large number of ingredients in their product, which is surprising given the size of the pill. While according to their nutrition facts each pill is 1400 mg – which is relatively large compared to other similar products – given their long list of contents, that is not enough to ensure that each of these ingredients is in a large enough quantity as to be bioavailable.

Maca Root: A South American herb that has been shown to have a variety of effects on the body that are beneficial for sexual performance. It is a mild stimulant that improves circulation, which can be beneficial for erectile function, and it can increase mental arousal and libido.

It has also been shown to improve physical stamina in its users and helps increase overall energy levels. Maca root has also been tied to seminal output, and may help increase ejaculation volume.

Longjack Extract: A kind of long grass that grows in Malaysia that has been shown to have pro-testosterone qualities. Longjack, also known as tongkat ali and eurycoma longifolia. Is one of our experts’ most highly recommended male enhancement ingredients.

Tribulus Terrestris: An inedible fruit whose extracts can increase the brain’s sensitivity to testosterone, which improves its overall efficacy. Tribulus pairs particularly well with longjack and other testosterone production boosters.

Yohimbe: An extract taken from the bark of an African tree that many believe to be an aphrodisiac, despite clinical data that shows otherwise. Yohimbe contains yohimbine, which is a stimulant that can have pro-erectile qualities due to its effects on circulation, but that also can have some other negative effects as well, some of them potentially serious.

Yohimbe increases heart rate, which in turn increases the volume of blood that is pumped throughout the body, including to the genitals. This also puts an enormous strain on the heart and increases blood pressure, sometimes to dangerous levels.

Follow this link to see which male enhancement products have scored the highest with our panel of experts.

Ejaculoid will most likely be able to live up to its promises of increasing ejaculatory volume. Their ingredient profile supports this as it increases testosterone levels, which are directly tied to semen production.

It also uses maca root, which is another ingredient that has also been shown to have a positive impact on ejaculatory volume. Maca is considered a high-quality ingredient for male enhancement products by our staff of experts, who also rate tribulus terrestris and tongkat ali.

Tongkat and tribulus tend to pair well together, which can be beneficial for testosterone production overall. This can also have positive effects on erectile function, libido levels, and other factors of sexual performance.

Ejaculoid does not even use any ingredients like L-Arginine that can increase the size of users’ veins and allow for more blood to pass through them at a time, counter-balancing the effects of their pressure-increasing ingredients. This left our experts very concerned about the potential for some users to experience a negative incident related to the brain or heart, especially those with pre-existing issues with those organs.

They also do not well display their dosage amounts, so it is unknown exactly how much of either of those chemicals is being ingested at a time. This can increase the potential dangers associated with Ejaculoid, and it decreases the chance that they have high enough quantities of all of their more reputable ingredients.

Ejaculoid is a daily dietary supplement that some men take in order to increase their ejaculatory output and general testosterone function. It has several ingredients in their proprietary blend that are highly recommended by our experts and others that they strenuously caution our readers against.

They are manufactured by a company that has been shown to slip dangerous unlisted drugs into their products, leading to interactions with the FDA and other government regulatory agencies in both the US and abroad. Neither Ejaculoid nor any of the other products from Goliath or Nutraloid Labs are considered trustworthy by our review team.

Ejaculoid has some ingredients that, on their own, would be encouraging to our team that it could be an effective product. Unfortunately, these ingredients are paired with other more dangerous substances that do not belong in safe, effective male enhancement products.

The fact that they do not accurately display their ingredients, combined with their history of using other potentially dangerous and illegal substances in their products, makes our team of experts even more worried about the overall safety of Ejaculoid.

It would be highly irresponsible for our review team to recommend Ejaculoid to our users, especially when there are so many other products on the market that use a combination of tribulus and longjack, such as Viritenz. Viritenz also contains maca, as well as L-Arginine, a noted vasodilator that has shown potential for increasing testosterone production as well.