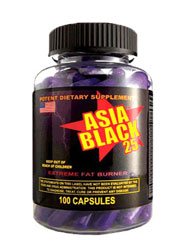 What is Asia Black?

Despite being banned in the United States, Asia Black markets itself as a product that still contains ephedra. A top of the line stimulant that has been known to cause potentially dangerous side effects, this product it boasts to be an incredibly potent and effective diet pill.

And it’s not only ephedra that is in this product, but a whole array of other stimulants that are meant to give an explosion of energy, as well as act thermogenically to annihilate fat where it exists. So is there sufficient evidence prove that this product is competent? Is it even safe to consume? The answers to these questions are found below.

Cloma Pharma is the company that produced Asia Black. It’s website does not list a location for the company. Despite ephedra existing as a banned substance, the home page of the website openly gasconades that the company sells ephedra products. Asia Black cannot be found on the company’s website, however it can be found from 3rd party retailers such as A1supplements.com.

This product asserts that it functions through 4 key aspects: eliminating hunger pangs, sending energy levels into hyperdrive, powering up metabolism and scorching fat off the body. The stimulants present in this product in addition to the supporting ingredients help accomplish it’s design. Asia Black makes no mention of how diet and exercise play roles in conjunction with this product. Users are instructed to take 1 capsule a day after meals and to never exceed 3 capsules.

Not everyone was impressed with this product, with some claiming that actual ephedra wasn’t even present.

Despite the ban on ephedra, Asia Black has included this ingredient, along with many other stimulants. To make these substances more dynamic, yohimbine was added as well. Because of all the stimulants present, this would not be a good product for someone who has sensitivity issues with stimulants. The adverse effects that may result from this product may prove disastrous, some effects include hypertension, heart attack and death. Diet pills on the top 10 list are much safer.

ECA Proprietary blend:
–Ephedra nevadensis powder: An incredibly powerful banned substance that has made it’s way into this product anyway. May cause adverse reactions such as cerebrovascular accident, myocardial infarction and death.

–Green tea: Beloved in the weight loss world for it’s antioxidants and ability to raise metabolism, mental focus and clarity.

–Yohimbine: Notoriously known to help relieve symptoms of sexual dysfunction, this has been known to increase the potency of stimulants.

–Cayenne pepper: A agent of thermogenesis that is also commonly used in culinary dishes.

–N-acetyl L-carnitine: An amino acid that is known to relieve mental ailments, as well as infertility in men.

–Citrus aurantium: Nearly the same chemical makeup of ephedrine, this is known to also cause similar side effects.

–African kola nut: Believed to be one of the planet’s first flora, this nut is high in caffeine and may give it’s user a clear mind.

–L-tyrosine: Chemically known as 4-hydroxyphenyl alanine, this amino acid is known to treat ADD and Parkinson’s disease, as well as quash hunger pangs.

–Evodia fructus: From a tree that originates on the mainland of Asia, this has been known to act as a remedy for gastrointestinal and abdominal disorders, as well as congestive heart failure.

–Bladderwrack: A species of seaweed that has been used as a remedy for thyroid maladies because of its high iodine content.

Some of the ingredients are known to have positive health benefits. These include yerba mate, green tea and cayenne pepper.

The fact that this product contains ephedra is bad enough. The substance was banned because of the negative adverse reactions it has been known to cause in users. Some of these reactions include hypertension, myocardial infarction, even death.

To make matters worse, it’s not just ephedra that is included in this product. Citrus aurantium is the legal equivalent, yet it has been known to cause side effects akin to ephedra. Mingled with this are other stimulants such as green tea, yerba mate and caffeine. Adding yohimbine to the mix only makes the concoction all the more robust.

To top it off though, there are absolutely no studies provided that can support that taking this mix of stimulants can in any way be beneficial to your health. Sure you will get an energy boost, but at the cost of possibly your very well being, we think it’s just not worth it.

A combination of powerful stimulants such as are found in this product are always something to watch out for. The adverse reactions your body may experience may be detrimental to your health.

Taking any product with ephedra is a potential risk to your health. The negative side effects of this substance make it a gamble every time it is consumed. And for the people who think it may be worth it anyway, the company provides no studies whatsoever to back up claims that consuming ephedra is beneficial. There are always safer alternatives available. If there was ever a sign that this product may be no good, we’d have to be it’s the fact that the company doesn’t even list this product on their own website anymore.

Diet pills should not be a potential hazard to your health, and should only benefit you.